“It never holds back. It continually does the unexpected.” 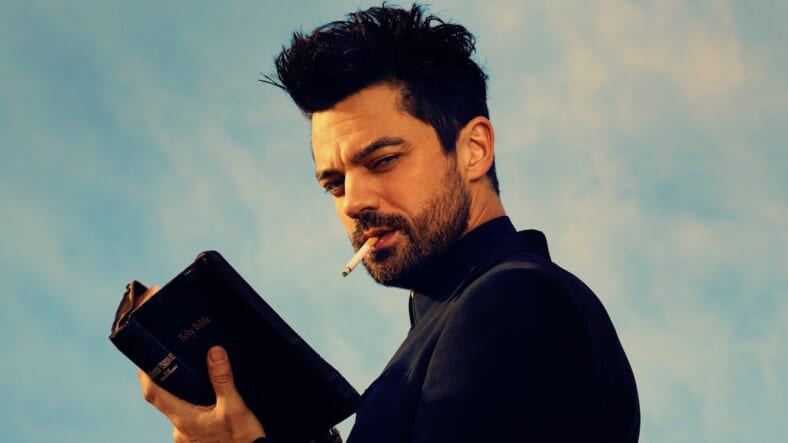 In an alternate universe, Dominic Cooper might not be an actor. In fact, he almost didn’t make it into an acting program at all.

“It’s very lucky that I got in, because I left it up to the very last minute,” he remembers of his audition to the London Academy of Music & Dramatic Art. “I think there was only one drama school in London left taking applications.”

Cooper, who had been a traditional university student, had a change of heart and decided to pursue the performing arts. And it’s a good thing he did: The 40 year old is currently starring in the third season of AMC’s comic book adaptation Preacher, a series that’s equal parts thriller, action, horror, and dark comedy.

While Cooper had a backup plan in case acting didn’t pan out (he paid his drama school tuition by working in advertising), he’s earned consistent work ever since his big break: a minor part on HBO’s Band of Brothers. Roles in The History Boys and Need for Speed followed.

“I think when you begin, you’re happy to be in absolutely anything,” Cooper says. “You are continuously told, when you’re training, that it’s more likely than not that you will never, ever work professionally, or certainly not make a living from it. So when you do manage to, you feel so surprised and shocked.”

And make a living he has, with diverse projects ranging from the dramatic stunner An Education to the musical Mamma Mia!, and big-budget action roles in such films as Warcraft: The Beginning and Captain America: The First Avenger, and Marvel’s Agent Carter television series.

There seemed to be no shortage of interesting opportunities for Cooper, so when he first sat down to hear the pitch for a new show called Preacher, which seemed even more outside the box than his previous work, he was intrigued.

“Everyone was talking about this script. I read it, and I thought it was unlike anything I’d seen,” he says. A meeting with the show’s executive producers, Seth Rogen and Evan Goldberg, sealed the deal. “It was one of the funniest meetings I’ve ever had,” Cooper laughs. “Can you imagine those people trying to explain the storyline of Preacher? It was like some sort of LSD, weird dream that I was in.”

If you haven’t seen it, the show centers around the concepts of heaven and hell, complete with angels, demons, God, Satan, and the “Saint of Killers”—a supernatural being tasked with killing Cooper’s character, preacher Jesse Custer (who, by the way, has been overtaken by a supernatural force called Genesis that gives Custer the power to command others to do his bidding).

The show is odd, but Cooper thinks that’s part of Preacher’s draw. “Yes, it’s different. Yes, the source material is peculiar,” he muses. “It never holds back. It continually does the unexpected. But it also has these incredibly well-crafted characters that I think each and every one of us can identify with. I never, ever thought I’d be doing it—I still find it hard to understand how that happened.”