Here Are the Best Places to Party in Downtown Miami

Move over South Beach, downtown Miami is the hottest neighborhood in town. 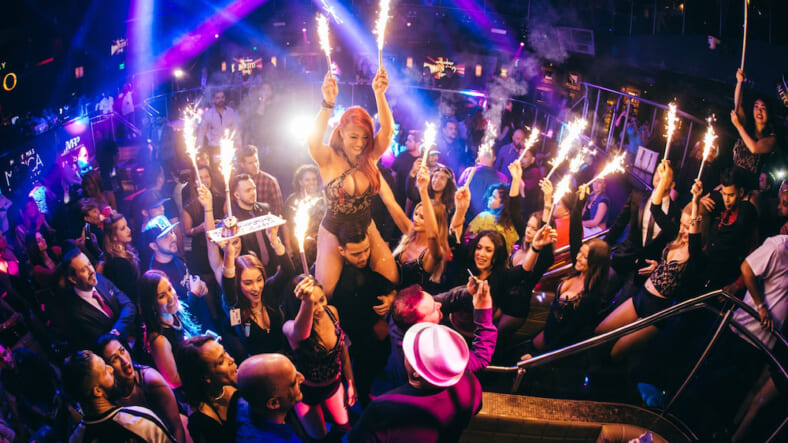 It’s a Thursday night in Brickell. Diners at Komodo nibble on hamachi crudo as a wave of leggy young women parade through the dining room around them, filling up tables in a section inconspicuously presided over by a large security guard. David Grutman darts around the floor with the alertness of a regal hunting dog, nose in the air, iPhone in hand, anticipating the imminent arrival of the evening’s VIP guests.

The managing partner of Miami Beach nightclubs LIV and Story, Grutman opened Komodo in 2015 as his first foray into both the restaurant world and the rapidly developing Brickell financial district on Miami’s mainland, located across Biscayne Bay from South Beach and adjacent to downtown, bordered by the Miami River. In recent years, Brickell has seen a boom in luxury condominiums, restaurants, and nightlife venues, making the area a desirable place to live and play, especially among Miami’s young professionals.

Tonight at Komodo, Diddy is throwing a Welcome to Miami party for retired New York Yankees captain and new Miami Marlins co-owner Derek Jeter. In attendance are a cast of characters who regularly headline Grutman’s establishments: DJ Khaled, Busta Rhymes, and French Montana. This is exactly what diners at Komodo are here for—a chance to rub elbows with the celebrities Grutman has famously befriended by throwing legendary parties in Miami for the past decade.

He initially saw potential in Brickell when he noticed guests were dining at popular restaurants like Zuma and Perricone’s Marketplace & Cafe before going to the beach for his clubs. “I think they just want to go with the hot places, to tell you the truth,” he says. “And for the first time ever, people see Miami has an urban area now and not just South Beach. It amazes me that people travel from all parts of Miami to go to Komodo, despite Brickell being known as more of a business and financial district. I never thought in a million years people would leave the beach and come over here.”

On the way back to South Beach, there are more restaurants and bars in Brickell and downtown worth swinging by than ever before. A U.S. subsidiary of Hong Kong–based Swire Properties debuted the $1.05 billion mixed-use development Brickell City Centre, a high-end, alfresco shopping center with multiple restaurants, office towers, and condominiums, in November 2016.

“Coming from a European background, in which apartment living was the norm, led me to develop here,” says Ugo Colombo, a Milan-born developer who was one of the first to build luxury condominiums in Brickell back in the 1990s. “I saw a void in Miami’s condo market because buyers typically associated ‘luxury’ with larger-style homes. So I set out to develop ‘mansions in the sky,’ a.k.a. large, luxury condominiums with water views, over-the-top amenities, security.” Colombo’s latest project, Brickell Flatiron, is slated to debut in 2019. “I always believed that sooner or later that area would become very attractive. It needed a catalyst like Brickell City Centre to really give it a boost.”

The intersection of N. Miami Ave. and NW 11th St. offers a concentrated snapshot of this juxtaposition, where E11EVEN Miami, the 24-hour nightclub that’s become one of the hottest spots in town. Owner Dennis DeGori has created something utterly unique to downtown Miami: a massive club with multiple elevated stages, where go-go dancers, aerialists, contortionists and more theatrical characters put on wild shows. It was described at the time of its opening as an “upscale nightclub, meets Cirque du Soleil, meets international cabaret.”

E11EVEN is kitty-corner to Club Space, the city’s long-standing after-hours techno club, which has also been known to stay open into the wee hours.

But between these two megaclubs, a trio of homey bars and restaurants offer a completely different kind of night out. The Corner is a softly lit bar with large picture windows and rough-hewn wood paneling serving some of the city’s most expertly mixed classic cocktails to an eclectic local crowd. A few doors down, Fooq’s is an intimate restaurant specializing in global fare with Persian and Italian influences, where a wall of ephemera features both a Native American dream catcher and a Grateful Dead acid bear.

While the area is still on the rise, downtown is ripe for further development, and many see it as Miami’s next It neighborhood. “As more people move in, you’ll see increased demand for restaurants and shopping at the ground level,” Colombo says. The Brightline high-speed rail service and its MiamiCentral station will connect downtown Miami to Fort Lauderdale and West Palm Beach before the end of the year, and the forthcoming, nearly 30-acre, $3 billion–plus Miami Worldcenter mixed-use development is slated for 2019, exponentially increasing the area’s curb appeal.

As Grutman puts it, “There’s a lot going on. Miami should be excited.”

But Don’t Rule Out South Beach Just Yet…

Sure, downtown and Brickell are heating up, but South Beach will always be hot. Visitors in the know will always want a room at SLS South Beach or The Setai, a steak at Prime 112, or a table at LIV. But South Beach is also evolving. New hotels, restaurants, and nightlife are moving inland and away from the busiest stretches of Ocean Drive to hot spots like Collins Avenue and the area surrounding Collins Park, where boutique hotels are being built or refurbished. The Plymouth, for example, brings an art deco redesign to its property, featuring an outpost of NYC’s acclaimed Blue Ribbon Sushi Bar & Grill and its famous fried chicken.

Kimpton Angler’s Hotel offers pampered seclusion steps from the beach, featuring suites, lofts, two-story villas, and three-story poolside bungalows. The hotel is expanding and plans to have a new 85-room tower, complete with a rooftop pool, finished in early 2018. Washington Park hotel, meanwhile, is an art deco refuge and home to the second outpost of New York’s Employees Only, a speakeasy hidden in the venue’s historic coral house.