Robert Schwartzman made a movie, because he can. 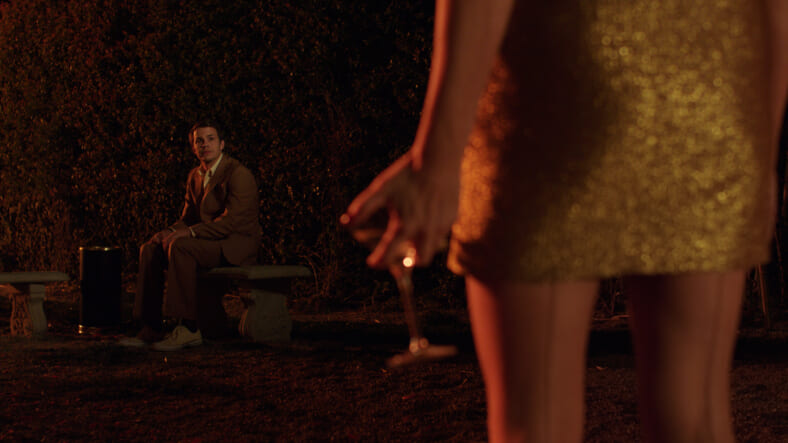 It’s good to be Robert Schwartzman, who by the virtue of his family connections has completed his first feature, Dreamland, which premiered at the 2016 Tribeca Film Festival this week. The nephew of Francis Ford Coppola, younger brother of Jason Schwartzman and son of Godfather actress Talia Shire cashed in his presumed birthright to have a middling, fairly unoriginal story realized — and elevated — with the combined aid of Hollywood royalty and a talented cast that includes Johnny Simmons (The Perks of Being a Wallflower), Amy Landecker (Transparent), and Beverly D’Angelo (National Lampoon).

It’s easy to see why Simmons came on board: His character, Monty Fagan, is a promising young pianist who escapes a dead-end relationship and near-poverty when he lands a lounge gig at a swanky hotel, and meets a Mrs. Robinson-esque trophy wife (Landecker) who inexplicably lavishes him with attention and, eventually, financial gifts. Even when Monty is behaving selfishly and irresponsibly, he’s drawn as a sympathetic victim of the women in his life: His bored girlfriend, her drunk, shut-in mother, and Landecker’s predatory lover. It’s less clear why Landecker and D’Angelo agreed to be caricatured in the service of …. What exactly? It seems that Monty is the only character entitled to an interior life, though Landecker tries mightily to give her character something more to say than what the script offers her. D’Angelo doesn’t have the chance: her character is the pathetic kind of sad, and there is no attempt to explain how and why she got to the place she did. She’s simply in the way.

Schwartzman is clearly proud of his lineage. Brother Jason provides Dreamland’s only laughs as a gleefully self-obsessed loan shark. A scene in a karaoke bar evokes cousin Sophia Coppola’s Lost In Translation. The camera lingers for a beat too long on a bottle of Coppola wine. There are nods to more than just his family’s creations: Dreamland appears to be intended as an update of sorts to The Graduate; and there are shades of Sunset Boulevard. But the references are too scattered and shallow to be taken as a genuine homage.

Dreamland is not without its moments: Most of the hotel scenes have a warm, otherworldly feel; a long-distance phone call between Monty and his mother (Talia Shire) cuts through the story’s smugness to reveal something like an emotional core, but it comes too late. If someone in the Coppola family tree wants to make a movie, a movie will be made, but that doesn’t mean we have to like it.