Zendaya says “This is only the beginning.” 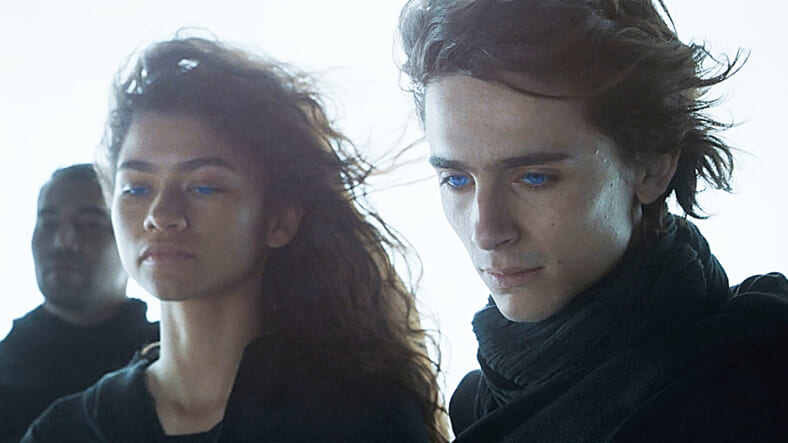 Our last look at Dune before the movie debuts around the world is full of the epic action seen in earlier previews, all of it enhanced with a certain gravity lacking in more kid-friendly stories like Star Wars. There are insect-like spacecraft and even some sandworm-riding action.

Zendaya plays Chani, a woman living on Arrakis who shows up in Paul Atreides’s (Timothée Chalamet) dreams and eventually in his real life. That’s where she drops the line that lets us know just how much story there is to go: “This is only the beginning.”

It isn’t a secret that Dune director Denis Villeneuve believed this wasn’t a story that could be confined to one movie. He said in September that he’d wanted to shoot a second movie while filming this one and he sold the idea of a new version of Frank Herbert’s novel in two parts when the movie was in development.

“We have been hearing in the past few decades that it’s not possible to adapt this book, and that it’s an impossible task. I think that in the back of the mind of the studio, it’s still the same!” Villeneuve says with a hearty laugh.

“So the first thing was to prove that there was a beautiful, popular movie that can exist, and I think that I proved that – everybody at Warner Bros and Legendary, they are 100 percent behind the project. They feel that it would need a really bad outcome at the box office to not have a Dune: Part Two, because they love the movie. They are proud of the movie, so they want the movie to move forward. And they still did half of it. So, you know, I’m very optimistic.”

In a Deadline Interview, Timothée Chalamet seemed to take it for granted that there would be another movie, saying Zendaya’s character Chani “will play a huge role in the next film,” though he doesn’t “know if there’s a script yet, but just based on the book, along with Lady Jessica [Rebecca Ferguson], they have a lot to do together, let’s put it like that.”

Chalamet clearly believes Zendaya will blow people away in Dune:

Zendaya was incredible in this movie; the moment she pulls the mask down, it felt properly showstopping and powerful. I was hiding behind the camera, counting my lucky stars, because I was there in month two of the shoot, and here was a total powerhouse just coming in for the first time.

Dune premieres in theaters and will be available to stream on HBO Max beginning October 22.