“Guy on the left is way cooler.” 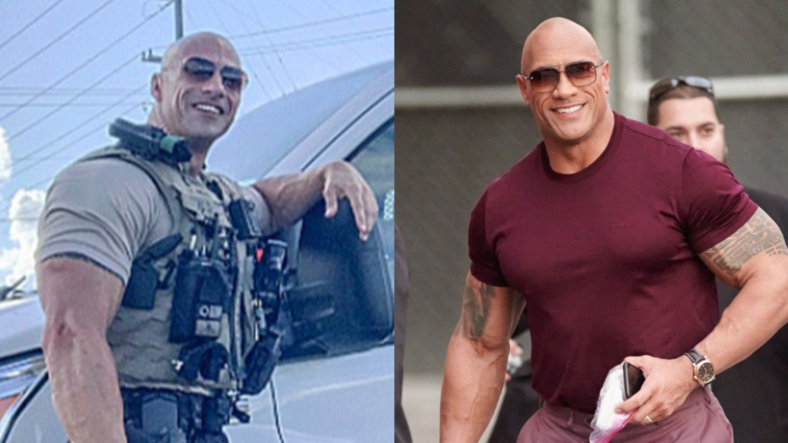 Somewhere in Alabama right now Morgan County Sheriff’s Office Patrol Lieutenant Eric Fields is going through another day of viral fame. A coincidence of genetics and grooming choices combined to make Lt. Fields look eerily like Dwayne “The Rock” Johnson. Even The Rock himself couldn’t help but agree.

Oh shit! Wow.
Guy on the left is way cooler.
Stay safe brother and thank you for your service. One day we’ll drink @Teremana and I need to hear all your “Rock stories” because I KNOW you got ‘em 😂😈👊🏾🥃 #ericfields https://t.co/G38tOr68cW

The Rock quote-tweeted a Bleacher Report comparison between him and Fields and wrote, “Oh shit! Wow. Guy on the left is way cooler. Stay safe brother and thank you for your service. One day we’ll drink @Teremana and I need to hear all your ‘Rock stories’ because I KNOW you got ‘em #ericfields.”

Fields has been locally known for his look for a while, but when Morgan County posted a photo of him online it went majorly viral.

People can get touchy about being told they resemble someone famous. Celebs can be pretty sensitive about it, too. Not The Rock. He had no problem agreeing with the admittedly (at least in photos) uncanny likeness.

Eric Fields, who at 37 is 12 years younger than the seemingly ageless Johnson, told AL.com that he’s “been called The Rock and Vin Diesel’s love child. I go along with it. It’s humorous. It’s flattering. It could be worse people, I guess.”

The veteran law enforcement officer has just been rolling with it, though. He also wanted it clear to those interested in his status as a suddenly-famous doppelganger that he doesn’t try to be someone he’s not. “I just plan on being me,” he reportedly said. However, he’ll mess with people at least a little, too. “I’ll cut up. I’m a big cut-up,” Fields said to AL.com, but if his Rocklike looks come up, he does “play along.”

“LT FIELDS” ACTION FIGURE 😎
My wife made me a action figure from The Rock’s WWE figure 🤦🏽‍♂️
she is getting a kick out of this 🤣😂🤣
(Thought I would share incase Hasbro was looking 😆) pic.twitter.com/7lTRvYvA9w

In the end, however, Fields said he “really couldn’t be anybody but me. I’m just glad I could be part of someone’s happiness and laughter.”

Fields has been doing police work of some kind for 17 years and according to his Twitter bio, he’s worked “Narco/ SVU/ Investigations/U.S. Marshals TFO/Patrol.” If he ever wants to retire early—and many in law enforcement often do, given the often extremely stressful nature of the job—at least he knows he has a good shot at making a living as a Dwayne Johnson-certified Rock Impersonator.

That said, The Rock might just ask him to drop the bit about Fields being his and Vin Diesel’s lovechild.