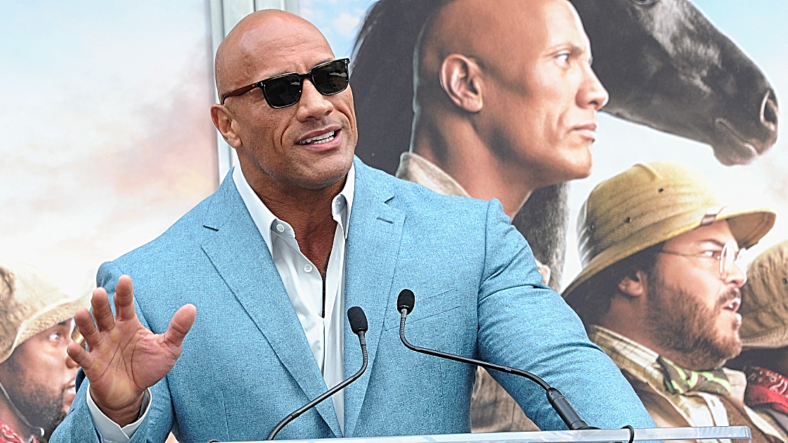 According to a new poll, nearly half of all Americans—46%—would vote for action star and former pro wrestler Dwayne “The Rock” Johnson if he ran for president. The most interesting thing about that poll? Johnson did not disavow it or play it down. In fact, he seemed to embrace it in his social media posts.

In his photo caption, Johnson wrote:

I don’t think our Founding Fathers EVER envisioned a six-four, bald, tattooed, half-Black, half-Samoan, tequila drinking, pick up truck driving, fanny pack wearing guy joining their club – but if it ever happens it’d be my honor to serve you, the people 🙏🏾💪🏾🇺🇸

Not a real full-throated denial of the possibility there. Another celeb famous for his action chops, Chris Evans (Captain America himself), got in on the fun in Johnson’s Instagram comments, asking if The Rock had “thought about a running mate?? :)”

The Rock’s Young Rock on NBC is a fictionalized, funny look at his life from childhood on, and one of its framing devices is Johnson crisscrossing the United States as he campaigns for president in 2032. Even if that story element wasn’t The Rock’s idea—and for all we know it was—it does a good job of putting the image into people’s minds.

Piplsay polled 30,000 US citizens to find out how many would support a President Rock. The poll was titled, “Hollywood celebs as politicians: What do Americans think of it?”

Oscar-winner Matthew McConaughey also did well in the same poll, especially among Millennials. Here are a few more insights from Piplsay:

Johnson has been flirting with a run for president for quite some time, even as he managed to somehow seem pretty apolitical compared to many in Hollywood, which is largely—but not completely—dominated by progressives. In February 2021 he told USA Today that he “would consider a presidential run in the future if that’s what the people wanted.”

“Truly I mean that and I’m not flippant in any way with my answer,” he said, “That would be up to the people…So I would wait, and I would listen. I would have my finger on the pulse, my ear to the ground.”

So will he actually do it? The Rock is pretty good at keeping all his projects under wraps till he’s ready to drop the big reveal, so it’s still anyone’s guess. But regardless of your political affiliation, it’s hard to disagree with the fact he talks a good game since all many people want in a politician is someone who truly gives a damn about their needs.

Only the Secret Service might object, since what do you do with a candidate or elected official who could probably take care of himself in a bad situation better than an entire squad of agents?

After that, it’s anyone’s guess as to what he’ll do.