Why Dwayne Wade Is Still The King Of South Beach

From NBA championships to enrolling at Harvard Business School, the Miami Heat star is living large. 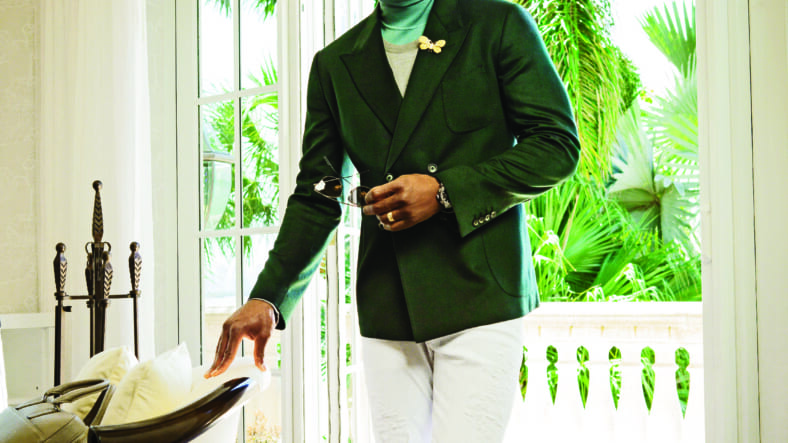 Dwyane Wade has a routine on road trips. When he climbs aboard the Miami Heat’s charter plane, his in-flight entertainment consists of watching game film. “I want to get into it immediately, so I can see what we did right and what we did wrong,” Wade says. “I’m always looking to see how I can improve.”

That approach is part of the reason why Wade, now a 13-year veteran, has accumulated a Hall of Fame résumé: three NBA championships (2006, 2012, 2013), the 2006 finals MVP, the 2009 league scoring title and 12 All-Star Game selections. It’s also why the shy, awkward shooting guard from Chicago’s South Side is now a global luxury brand, with a movie star wife (Gabrielle Union) and footprints in the world of business, fashion and philanthropy.

In 2011, President Obama even appointed Wade to the Fatherhood & Mentoring Initiative, a White House task force that aims to build healthier communities through role models. (On the president, Wade quotes the late sportscaster Stuart Scott: “Cool as the other side of the pillow.”) The following year, Wade became a New York Times best-selling author with the release of his first book, A Father First: How My Life Became Bigger Than Basketball.

As a boy in Chicago, Wade could hardly have imagined he’d make it to the White House. “Where I come from, growing up in the inner city without having a lot, you are unsure of yourself for many different reasons,” he says. “When you’re a kid and you don’t have material things—like living in a house with the lights cut off and no water—that affects you. That affects how you think people are looking at you. Maybe they’re not, but it affects you mentally.”

Basketball, he says, gave him confidence. “I felt like my true self once I got that ball in my hand,” Wade says. He embraced the sport around the age of eight after moving to Robbins, Illinois, to live with his father. From there, he starred at Harold L. Richards High School in Oak Lawn, led Marquette University to the 2003 NCAA Final Four and was selected fifth overall by the Miami Heat in the 2003 NBA draft.

“People thought that maybe he’d be a good player or an All-Star,” says Inside the NBA’s Kenny Smith, a two-time NBA champion with the Houston Rockets. “But one of the top five players at his position in the history of the game? No one saw that coming.”

Built on a stunning combination of athleticism, unselfishness and guile that leaves defenders helpless, Wade was the first member of his heralded draft class—which also included LeBron James, Carmelo Anthony and Chris Bosh—to win an NBA championship. In fact, his dominant performance in the 2006 NBA finals, when he averaged 34 points per game in the Heat’s series victory over the Dallas Mavericks, was reminiscent of Wade’s idol Michael Jordan. “I understood that I had an opportunity and I needed to seize it, and I did,” Wade says, looking back. “I felt like I was one of the best players in the game, and I had to show that, put that stamp on the finals.”

And there would be more. In the summer of 2010, James and Bosh joined Wade in Miami to form the Big Three, a superteam that would eventually reach four consecutive NBA finals, winning back-to-back NBA championships in 2012 and 2013. The city has since returned the love tenfold. After 13 seasons with the Heat, Wade has become a Miami institution, the town’s most beloved athlete since Dan Marino, and its unofficial ambassador. When he recruited Joe Johnson to the team earlier this year, he had a simple sales pitch: “Live in Miami, man.” It was an offer that Johnson, a free agent at the time, couldn’t refuse.

“It’s hard to be in a bad mood when living here,” Wade says with a laugh. “Miami makes you feel good every day.” He still remembers the culture shock of his first visit to the Magic City, when the team flew him and his family into town the day after the 2003 draft. “We got in a car and saw all these palm trees, but also a dog walking down the street with an outfit on. It was like a foreign country to me,” he says. “I had never experienced anything like Miami before, but I adjusted very fast.”

The city embraced him, and as the titles mounted, Wade’s off-the-court accomplishments multiplied too. In recognition of his charity work, he was bestowed the NBA’s 2012-2013 Community Assist Award. And there have been endorsement deals with brands like Gatorade, Lincoln, Sean John and T-Mobile, plus sneaker deals with Converse and Nike. More recently, he’s also formed partnerships with Hublot, menswear labels Naked and Stance, the Tie Bar and Mission Athletecare, which grant him rare creative input.

And after his contract with Nike was up in 2012, he shrewdly expanded into the international market, signing with the Chinese sneaker and apparel brand Li-Ning. Always looking to better himself, Wade enrolled in a course last summer at Harvard Business School. “I didn’t go to school for business. So, just like I study basketball film to be the best, I thought, How can I do that in the business world?” he says. “Go to Harvard and sit with some of the brightest and talk business.”

He’s brought the same attitude to bear on his interest in fashion, which has evolved from a personal form of expression into a full-blown lifestyle. Now one of the NBA’s leading trendsetters, Wade is known for taking risks, which sometimes means wearing bright fuchsia pants or the occasional cape. “It’s like a weird kind of rush,” he says.

“A few times, when I put on certain outfits, I’m like, OK, this is it. They’re going to talk about this.” And in fact, they have: The fashion world has done more than just take notice; they’ve made him one of their own. Last summer, Wade was selected as an ambassador for Men’s Fashion Week in New York City, and now he’s cohosting fashion events with Anna Wintour, in addition to throwing his annual A Night on the RunWade fashion charity event in Miami.

But depending on what happens this summer, Wade might have to take the event on the road. The one-year, $20 million deal he signed with the Miami Heat before this season will be up in July, when he becomes a free agent. For now, he doesn’t want to stress over what would be the unthinkable for fans—leaving Miami. “When the season is over, I’m going to sit down with the organization and we will figure out what’s best for the organization,” Wade says. “This is where I want to be and this is where I want to end my career.”

At the moment, though, Wade is focused on the NBA playoffs. He’s regained his explosiveness following persistent shoulder and knee injuries, and with a talented supporting cast (Bosh, Hassan Whiteside, Goran Dragic, Joe Johnson and Luol Deng), Wade expects the Heat to challenge LeBron James’ Cleveland Cavaliers in the Eastern Conference. He’s confident, but not making any predictions. “You don’t know if you have a championship team until you get to that point,” he says. “But I would love to win another championship. I would love to win two more, three more. I would love to keep going.”