If only Arya Stark had unleashed her bloodthirsty vengeance on him… 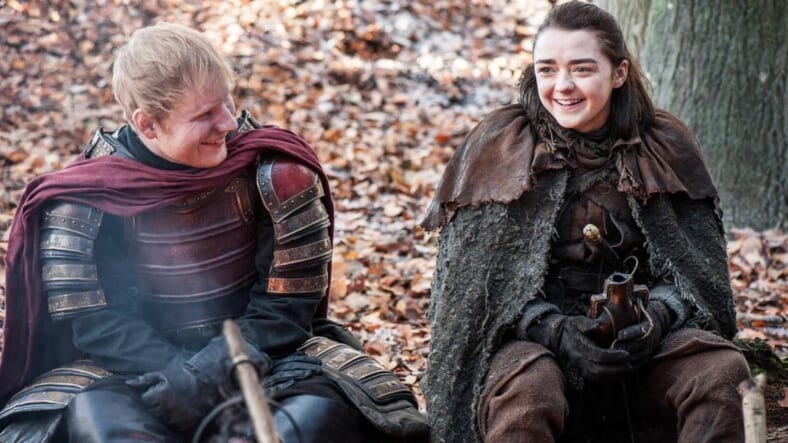 Sheeran was a guest on the episode—it was really kind of a glorified cameo—and while he’s got a strong fan base and has had solid chart-topping hits, it seems no one wanted to mix the ginger singer into the show’s usual brew of treachery, scheming, and murder.

I don't even know who Ed Sheeran is but recognized him on #GameofThrones. Not sure why cameos are necessary on the most popular show on TV

Was half thinking of getting back into watching GoT but I just saw that ed sheeran sings in the new episode so nah buddy, thanks.

Ed Sheeran getting stabbed multiple times or getting beheaded in GoT is what i want to see.

Exactly! The focus was on the fact that he is Ed Sheeran, not on the plot – there wasn't even an attempt at a character!

You’d never know that the episode was all about Daenerys Targaryen coming to Westeros, dragons and all. Or how Arya Stark was on a badass mission to fuck up the Freys—which she did in the episode’s bloody opening scene. Oh yeah, and the White Walkers are totally on their way.

Nope, Ed Sheeran was one of the biggest moments of the whole damn show, and sadly, he didn’t even get carved up by Arya after he and his soldier pals offered her some roasted rabbit when she stumbled upon their campfire in the woods.

Sheeran definitely has one defense: he’s not the first sort of somewhat twee pop star to show up on GoT. Past guests from the music world included Coldplay’s Will Champion, Snow Patrol’s Gary Lightbody and Icelandic ambient progressive snooze-rockers Sigur Ros.

But we still think Conor McGregor’s rumored cameo would have made more sense.

Anyways, here’s a heavy metal cover of the Game of Thrones theme song, just for laughs: