“Bears was popping elves in their mouths like Skittles.” 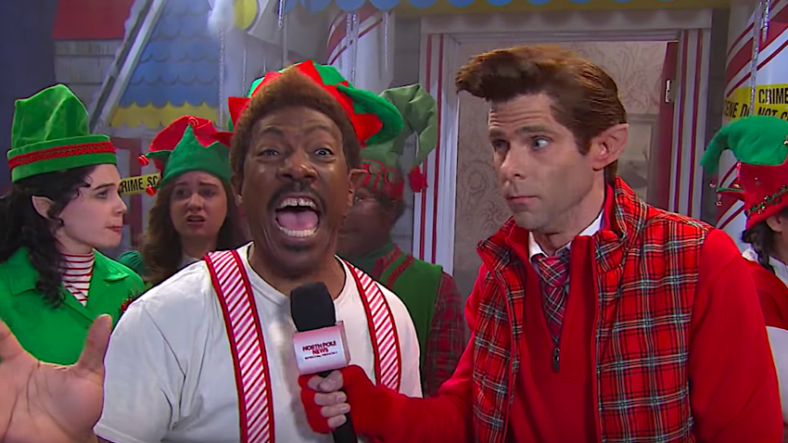 Saturday Night Live has been up and down quality-wise for years. Some new episodes are full of near-instant classic sketches while others are forgettable the moment they sign off. With the last new show of the 2010s, Lorne Michaels gave the SNL audience a hell of a Christmas present with the return of comedy legend and former cast standout Eddie Murphy.

From the opening monologue, which saw Murphy joined onstage by some of comedy’s leading lights—Chris Rock, Tracy Morgan, Dave Chappelle, with Kenan Thompson batting cleanup—through perhaps one of the funniest final sketches in show history in the form of “North Pole News Report,” it was a supercharged performance—it was hard to believe it had been 35 years since Murphy last did a full show at 30 Rock.

In “North Pole News Report” Murphy was an elf named Kiddle Diddles (not his choice!) who had witnessed a horrific polar bear attack on one of the North Pole’s toymaking facilities (“Bears was popping elves in their mouths like Skittles!”).

The increasingly frenetic on-the-snow report culminated in Cecily Strong’s appearance as an elf who said the whole disaster was caused by Santa not being willing to pay “5,000 more gumdrops than he wanted” for a fence to protect the perimeter.

Murphy then made it social media-friendly, shouting “Hashtag, ‘Santa Knew!'”

While that was easily the most original and energetic sketch, Murphy brought back several of his most classic characters: Mr. Robinson, whose neighborhood in the 35 years since Murphy was on the show had begun to gentrify, down to white yuppie neighbors who were appalled at the idea he thought they were accusing him of theft; Gumby, dammit—Murphy was so over-the-top hilarious that Colin Jost and Michael Che could barely maintain—and pimp/author Velvet Jones, who wasn’t the best Black Jeopardy contestant ever, but always selling, no matter what.

Watch those sketches below, then see if Saturday Night Live can maintain even half the energy level the comedy icon brought to the show when it returns on January 25, 2020, with host Adam Driver.