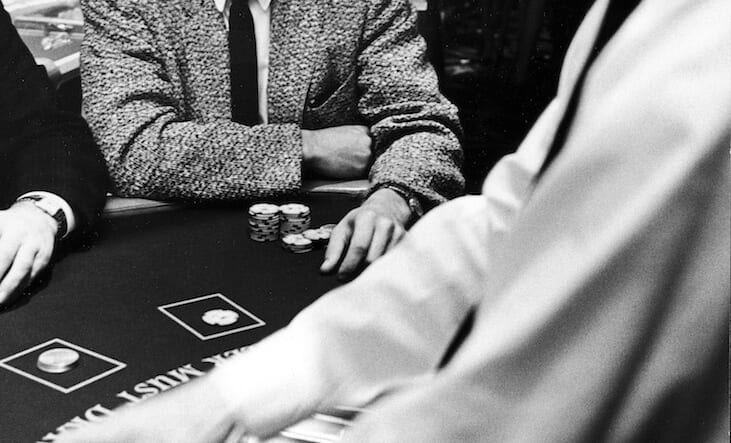 Edward O. Thorp‘s life story reads like fiction (or fantasy)—from his time in Las Vegas, where he perfected how to beat the casino, to his tenure leading a financial institution, where he helped develop many of the most advanced investment products on Wall Street.

Thorp’s gift is discovering rigged systems and turning them on their head, acting like a modern-day David versus Goliath. He has rubbed shoulders with Warren Buffett and foresaw the implosion of Bernie Madoff’s Ponzi scheme.

In his new book, A Man for All Markets, Thorp walks readers through his incredible journey, and teaches how to apply his techniques to daily life. Professor Thorp sat down with Maxim to discuss his book, his legacy, and where a man who has done it all goes next.

On developing his skills as an independent thinker:

It goes all the way back to childhood. I was left on my own to teach myself, and explore, and do whatever it was I was interested in. The freedom to explore was an important thing, so I learned to think things through for myself. I also got an early mind-set from my father, which was to question things and not just take what people say for granted. A good example is Madoff. He had more than 13,000 investors; they all thought the other ones were checking to make sure that everything was okay, or they thought, “Gee, such an important guy, well known, highly thought of, couldn’t be anything wrong there.” They went along with it, year after year after year; they didn’t think for themselves. When I came across the Madoff problem, I happened to be in the habit of thinking for myself, and it became obvious almost immediately that it was a fraud.

Anyhow, it was this early mind-set of thinking for oneself. The other thing that was important was kind of a scientific, logical way of thinking about life and everything that I encountered. Some people think logically about some areas of their life but not others. For me, it was a habit that was ingrained so early that I just applied it to everything. If I looked at one part of my life, and another part of it, I tried to look at it consistently, so things made sense across different areas. I didn’t have a whole set of instructions and beliefs instilled in me by other people that could be wrong. I had to sort of build the framework that I thought in from scratch, for myself in large part.

On the risk of beating a Vegas casino:

I was naïve about casinos, and I knew nothing about them, basically. This was just from something I came across. The reason I actually came across card counting and blackjack was because I had gotten interested in beating roulette earlier, and I wanted to go to Nevada to look at roulette wheels. My objective was to look at them and see if they were beatable, as I thought they would be from my experiments on half-size roulette wheels.

That’s how I came across card counting at blackjack. Somebody told me about a good way to play that would let me play almost even. I wouldn’t have an edge, but I would maybe lose slowly. My first naïve experiment at losing slowly kind of woke me up to the game and its possibilities. That was just kind of a chance thing. I was already open to the possibility, because I thought you could beat gambling, specifically roulette. It wasn’t a great leap for me to say, “Oh, well maybe you can beat blackjack, too.”

But I was naïve. I didn’t know what the world of casino gambling was like. I just assumed everybody was a good person until somebody showed me otherwise. So only slowly did it dawn on me, as I began to play out there, that there were going to be some serious problems.

As far as indexing goes, I advocated for people who don’t know anything about the market, and people think they know things when they don’t. The general information floating around in the world is something that either is worthless because it hasn’t been thought through and isn’t based on much, or many people have heard about it already and they’ve already acted on the information. So there’s no play left in the thing that you’re going to buy or to sell. It’s already moved the way it should from the information around.

That’s the problem with investing—you’ve got to do some work if you want to do better than the indexes, and doing work means investing time and money.

On recognizing the potential of a young Warren Buffett:

Now, how many people want to do that? You’ll find that most people are not that tenacious or determined. The other thing is that he’s unusually smart and talented. He must be in the top fraction of people in terms of brains and talent, so that means there are around 2,000 adults that might be able to do this. A lot of them are going to be wanting to do something
else, or not wanting to put their whole life
into it. For him, it is a 24/7 job.

On the future of hedge funds:

I think it’s over, hedge funds as a group, permanently. There’s too much money, and the fees are too high. With two trillion dollars or more chasing these opportunities, there just isn’t that much there for them to divide up between the greed of the people who run the hedge funds and the investors. There’s basically nothing left over for the investors.

I think the investors are really getting the short end of it now, from the asset class as a whole. Now, there are some individual ones that I’m invested in that I like quite a bit that are still doing well, but they’re hard to find, and the reason I can find them is probably because I’m very knowledgeable from my past life about hedge funds; I know what to look for. But generally? Stay away unless you’re an expert.

People don’t understand extreme risk. They tend to underestimate, or overestimate, depending on the person, how risky something really is—the chance of a lightning strike, the chance of getting the Zika virus, the chance of being hit by a car when you walk across the street, and so forth—because they don’t have any real sense of how risky this stuff is.

On gambling as preparation for investing:

Casino gambling itself is an amazing introduction to how to manage money, and how to control your emotions and to stick to your system, if you’re actually doing something in the investing world. What I found was that you learn at a low level, until you’re not scared, and then you crack the level up a little bit, until you’re not scared, and you keep going. Pretty soon, it just goes on and on and on. I mean, one dollar to 10 dollars for a while. Twenty to 200, 50 to 500, and then, in the investment world, a million to 10 million, 10 million to 100 million, that sort of thing.

On what comes next:

I’ve learned to apply clear economic and financial thinking to social problems. The tax code, climate change, immigration, even gun control—these are all issues which I believe could use my kind of thinking.

Let’s take taxes. The tax code is a mess. But the question is, How can we resolve this? If you collect extra taxes, give that money back to somebody who’s being overtaxed so there’s winners and losers on both sides. Take the recent failed effort to pass a carbon tax in Washington State. That money was to be used for environmentalists’ pet projects. But instead, you could have taken those funds and lowered the sales tax rate. I think that’s what they should have done if they wanted to pass that legislation.

If there’s emotion, I mean, illogic, you can’t get anywhere. If people are just screaming at each other, and nobody looks at the other person’s viewpoint, no progress will occur.

I hope people would say, “He cared about people both individually and overall, and wanted a world that was a level playing field, and one in which we would continue to improve ourselves. To educate, to progress, and to be happier and wealthier.” So whatever little I’ve done in that direction makes me happy.

From our February 2017 issue. Be sure to subscribe so you never miss an issue.