This sh*t really is bananas. 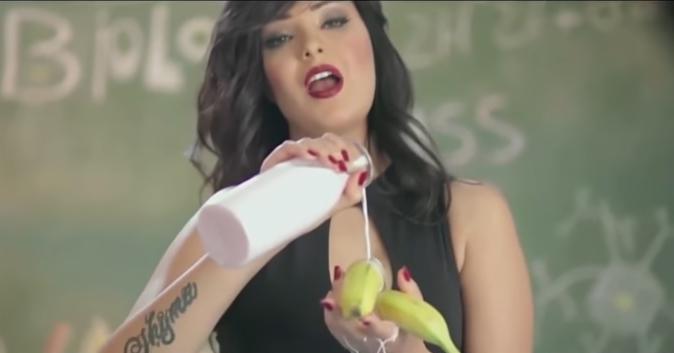 The BBC reports that singer Shaimaa Ahmed, known professionally as Shyma, was found guilty of inciting debauchery and publishing an indecent film by an Egyptian court following the release of the “I Have Issues” music video.

…but it was the suckling of phallic yellow fruit that probably pushed it over the top.

She took the innuendo a step further by pouring milk all over a bunch of bananas.

The authorities might not have appreciated the video, but this guy sure did.

Shyma had apologized before her arrest.

“I didn’t imagine all this would happen and that I would be subjected to such a strong attack from everyone,” she wrote on her now-deleted Facebook page.

Egyptian officers have a history of cracking down on purveyors of promiscuous content.

Earlier this year, Belgian model Marisa Papen was briefly jailed after she stripped down for photos in front of the Luxor pyramids. She managed to get off with a stern warning.

A petition to #FreeShyma may be in order. Who’s with us?