A new film shows that while Elvis may have been the King of rock & roll, that didn’t mean he was a laid-back liberal. 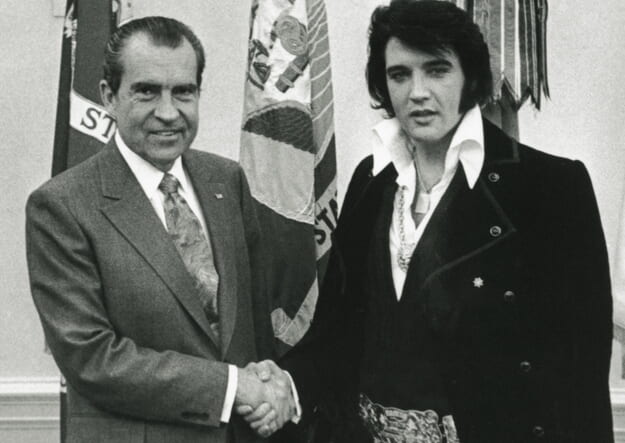 Around Christmastime in 1970, Elvis Presley hopped on a plane to Washington, D.C.; while in the air, he wrote a letter to President Richard Nixon requesting a meeting at the White House to discuss what he saw as the decline of American society. The resulting meeting is the subject of Liza Johnson’s lighthearted dramatization, Elvis & Nixon, starring Michael Shannon and Kevin Spacey respectively, which premiered at the 2016 Tribeca Film Festival this week.

As the movie notes, there’s no official transcript of the meeting or the phone conversations leading up to, and the tone of the movie strongly suggests that some creative liberties were taken. But there is a White House memo about the meeting, which makes us comfortable taking a few things at face value:

We’re not sure we believe that Elvis actually shot a gun at his TV screen when he didn’t like what we saw on the news, but we know that he was an avid gun collector. And Elvis & Nixon shows The King with very little regard for gun restrictions: He rolls into the Memphis airport with a pistol in his jacket and brings a number of firearms to the White House, including a World War II–era Colt .45 for the President himself.

While he may have had other, more self-serving reasons for his animosity towards The Fab Five, Presley says he blamed The Beatles for helping to create an anti-American sentiment throughout the globe and contributing to a drug-fueled youth culture.

3. President Nixon did not initially want to meet with Elvis.

The White House memo doesn’t get into this part, but the movie documents Nixon’s initial resistance to accepting a meeting with the most famous entertainer in the world. As Elvis & Nixon tells it, Nixon’s staffers — who very much wanted to the meeting to happen, given how it could help the President’s image among the youth vote — leaked the possibility of a meeting to Nixon’s daughter, who then convinced her father to accept it (and get an autographed photo for her.)

4. Elvis received a special agent badge from the Department of Justice.

Somewhat mind-bogglingly, the President gave in to Presley’s request for a badge designating him as a “federal agent at large” so that he would be able to infiltrate communists groups and hippies who were taking and selling drugs. As Smithsonian noted, his widow Priscilla Presley claimed he had far different motivations. “The narc badge represented some kind of ultimate power to him,” she wrote in her memoir, Elvis and Me. “With the federal narcotics badge, he [believed he] could legally enter any country both wearing guns and carrying any drugs he wished.”

5. Elvis was kind of obnoxious (maybe.)

The White House memo doesn’t get into any of this, but Elvis & Nixon portrays the meeting as a bit of a pissing contest between two of the most influential men in the world. According to the movie, Elvis was briefed on how to behave during the meeting, and was given strict instructions to leave Nixon’s Diet Coke and M&M’s alone. Once in the Oval Office, Elvis gleefully gulped the soda and snacked on the M&M’s, and was generally a bit rude. But Nixon couldn’t have been too offended: he apparently sent the King a thank-you note for the visit and the gift.