Don’t try this at your next job interview. 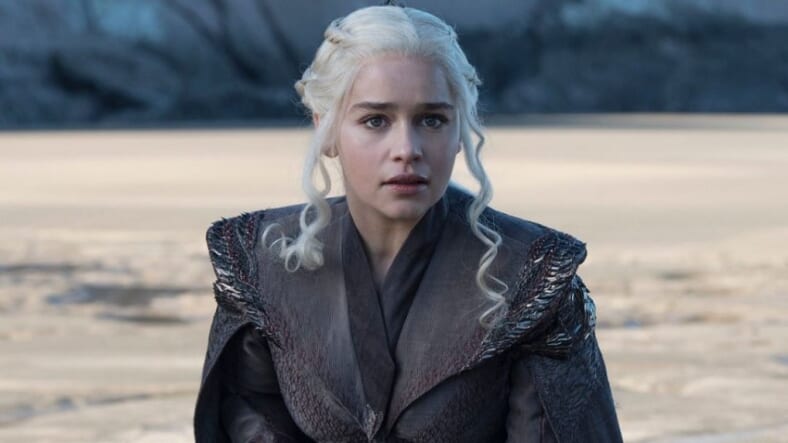 Her alter ego Daenerys Targaryen is intense, focused, and ruthless. This proves Emilia Clarke is an excellent actress—she reportedly pulled such a silly, off-the-wall, and well-timed move in her Game of Thrones audition that she finally secured the role.

Variety reports that GoT showrunners David Benioff and D.B. Weiss outed Clarke as an undercover goofball with some serious 80s-style dance skills as they presented her with the Britannia Award for British Artist of the Year.

Imagine Clarke doing the following in full Daenerys makeup and hair but wearing a Valley Girl outfit like Dancin’ Kim in the video above. She didn’t, but it’s fun.

Though HBO execs had seen the pilot for Thrones, they wanted Clarke to audition a second time. From Variety:

The meeting took place in “HBO’s corporate theater, which was large, dimly lit and empty except for us two and the president of HBO,” Weiss said. “We were smiling. He wasn’t. It was quite possibly the least inviting audition environment we had ever witnessed.”After Clarke’s initial reading, said president remained poker faced.“Emilia asked if there was anything else she could do to lighten the mood and David asked, ‘Can you dance?’ And without missing a beat, Emilia did the robot,” Weiss said. “She did it with commitment and she did it well…and even the president had no choice but to smile. She got the job 10 seconds after she left the room and the two of us ran to tell her before she left the building because letting her get on an 11-hour flight home without knowing seemed like cruel and unusual punishment.”

In accepting the award, Clarke admitted the showrunners deserved an award as well, “for hiring someone whose biggest job up until then was catering parties dressed as a Snow White.”

Hopefully this story will inspire some composer and lyricist to begin work on a Hamilton-style rap musical based on Game of Thrones.

Ideally, Emilia Clarke would remain in her role and The Robot would be her signature move.