Will Eminem’s ‘Curtain Call’ Be First Rap Record to Spend More Than 10 Years on Billboard 200?

Em’s greatest hits album is making history—go to Versusgame.com on your phone to vote now! 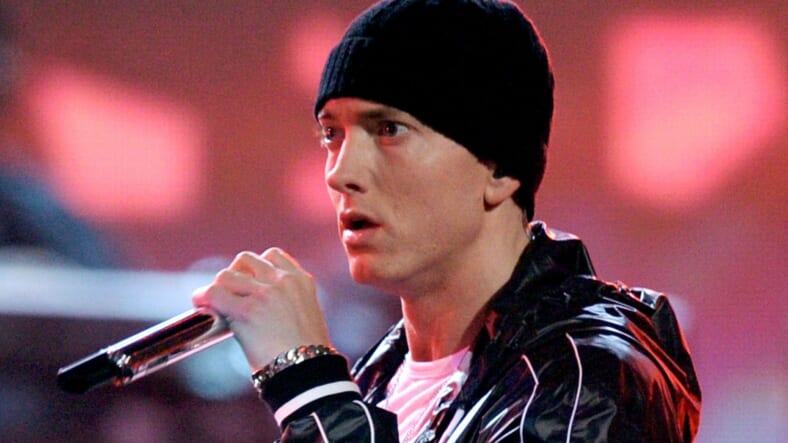 Go to versusgame.com on your phone to vote here on whether Eminem’s Curtain Call will make Billboard 200 chart history!

Eminem‘s compilation album Curtain Call: The Hits is officially the first hip-hop album to spend a full decade on the Billboard 200 chart.

The staggering achievement become official when Em’s 2005 greatest hits album logged its 520th consecutive week on the chart for the week ending March 27, 2021.

It previously was the sixth-longest-running album on the Billboard 200 chart, behind such classics as Pink Floyd’s The Dark Side of the Moon at 958 weeks, Bob Marley and the Wailers’ Legend at 669 weeks, Journey’s Greatest Hits at 659 weeks, Metallica’s Black Album at 598 weeks and Guns N Roses’ Greatest Hits at 520 weeks.

Em’s blockbuster Curtain Call features such hits as “Lose Yourself,” “The Real Slim Shady,” “My Name Is,” “Stan” and two previously-unreleased cuts, “When I’m Gone” and “Shake That.”

Will Eminem’s Curtain Call: The Hits continue to make history and stay on the Billboard 200 chart through April 2, 2021? Go to Versusgame.com on your phone to vote now!