The “Lose Yourself” rapper did not wear a sweater for the opening of “Mom’s Spaghetti.” 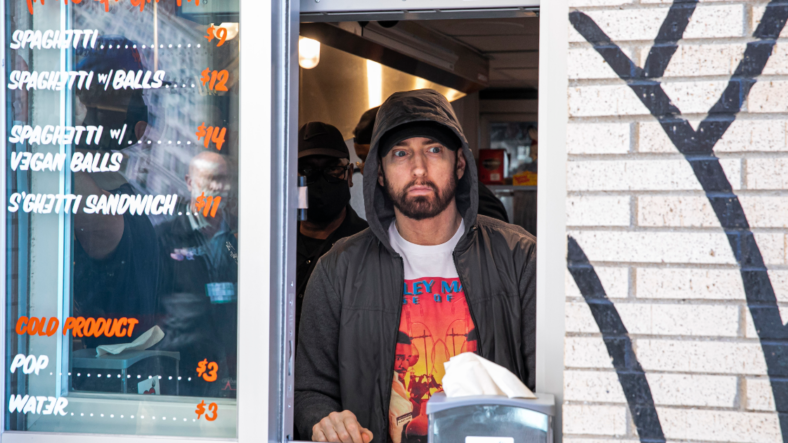 Considering that the lyrics of Eminem‘s song “Lose Yourself” associate “mom’s spaghetti” with “vomit on his sweater,” it’s a characteristically ballsy move for the hip hop star also known as Marshall Mathers to call his new restaurant “Mom’s Spaghetti.”

But that’s the name and Em put his signature on the endeavor when the eatery opened in downtown Detroit on September 29 by serving the first ten customers in person.

The 8 Mile star manned the takeout window of his new restaurant for several minutes, handing out boxes of spaghetti (no sweater included) and obliging fans with selfies along the way. There were plenty of customers—they lined the block, some having camped out on the sidewalk in anticipation of the eatery’s 5 p.m. opening.

Eminem is too big a star to get away with being publicly accessible for long. He got through the first ten customers before leaving with his crew, with fans chasing the rapper’s SUVs down the block.

As Uproxx noted, the opening coincides with Eminem gearing up to drop a song that will feature guest artists Mozzy, Polo G, and Skylar Grey. The single, “Last One Standing,” will also be on the Venom 2: Let There Be Carnage soundtrack.

Put on a sweater, warm up your leftover spaghetti: Both Eminem’s new song and the new Venom are set for release on Friday, October 1.