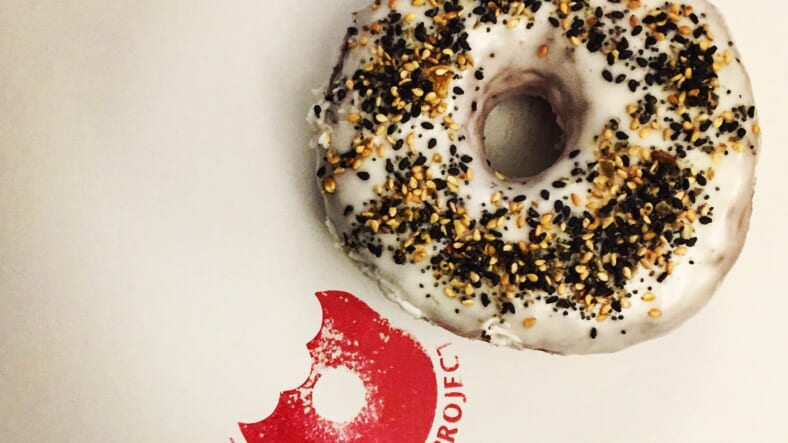 My favorite bagel is the Everything. My Saturday morning tradition usually consists of questioning how I got into bed the night before, hesitantly checking the remnants of my bank account, and crawling to the closest bodega near my apartment. Like clockwork, I order an Everything bagel (scooped out, because you know, calories) with a heavy amount of lox cream cheese to satisfy my Jewish ancestors. My store of choice, Brooklyn Bagel, prides itself on the abundance of  different cream cheeses they create daily — ranging from the basic vegetable to the slightly crazy cannoli.

Now, for me, I’m not about the sweet life. Sure, I have no problem inhaling a towering stack of chocolate chip pancakes from time to me, but my morning cravings usually consist of something savory, fried, and artery clogging. That is, until this morning. Plenty of other increasing popular food crazes have peaked my interest (like the $100 Donut and the Rainbow Bagel), but it wasn’t until I heard the words ‘Everything Donut’ that my spidey-senses really began to tingle.

The hybrid pastry, developed in the kitchens of New York City’s very own Doughnut Project, is exactly how it sounds — but better. First, you take a regular ‘ol yeast donut, drench it in an oozing sweet cream cheese frosting, and proceed to finish it with your traditional Everything bagel fixins (salt, sesame seeds, garlic, pepitas, and poppy seeds). The result is the sweet and savory combo of your dreams; a warm, mouthwatering bite that hits you with the creamy glaze first before blowing your mind, courtesy of the assorted bagel toppings.

Don’t think this is Doughnut Project’s first time at the rodeo. They regularly dole out the most twisted takes on the classic bakery treat, including salted chocolate with buttered pretzels, olive oil and black pepper, and ricotta-stuffed beets. And for just $3.75, it can be all yours.

I think it’s about time I break my morning tradition.