Here’s What We Know So Far About the Next ‘Star Wars’ Flick, Starting With BB-8’s Just-Revealed Evil Twin 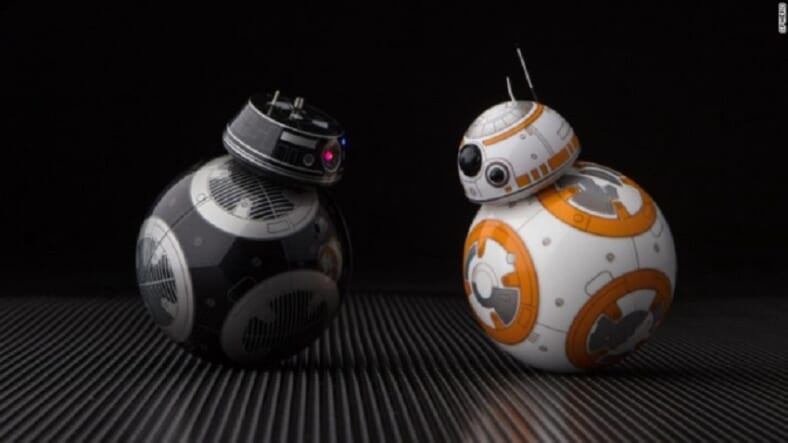 Star Wars: The Last Jedi won’t be in theaters for months, but we’re beginning to get the idea that things are definitely going in a darker, Empire Strikes Back-like direction.

One example is a just-released toy version of a droid that pretty much looks like a Sith-friendly version of adorable little BB-8. It’s called BB-9E and it looks like it might have a self-destruct mode in case it gets too close to anyone with good intentions.

In addition to this dark side variation on our friendly little bouncy droid, there are new AT-ATs—the giant walking tanks from Empire—that look like the spindly-legged old battle machines on steroids. The video below details those and more.

The other, most recent revelation could be the most important one of all: Luke Skywalker is definitely not doing well. In fact, if a photo on a Hungarian magazine cover that Mark Hamill tweeted is any indication, he’s going pretty damn dark.

In an interview with the Associated Press, Hamill hinted at just how complex a character Luke has truly become:

Luke changed, I think, more than the other characters in the original trilogy, from callow farm boy to a Jedi in training to finally a Jedi master. What you’re talking about is what really fascinated me. Between “Return of the Jedi” and “Force Awakens,” there’s just decades of history that’s unknown. So I was wondering how they’re going to handle all this. Now, obviously, with “Force Awakens,” J.J. (Abrams) had a full plate. It was inevitable that they would push me down the line. I was sorry I wasn’t able to work with any of the original actors again. But it’s not about us anymore. In this new one, I was saying to Rian Johnson: I need to know my backstory. It was kind of unclear. You read where he is now and what he’s doing now and sort of have to fill in the blanks for yourself. So I did do a backstory myself. It’s not about Luke anymore, so it’s not really important. But I had to make sense of it for myself. What Rian came up with, I was stunned.

We do know from the teaser released in April that Luke may perform some kind of Yoda-like role for the protagonist, Rey (Daisy Ridley), and that he may be working for some sort of transformation of what the Jedi truly are.

But Lucasfilm and Disney have, just as they did with The Force Awakens, done a good job of keeping a lid on the plot details.

So we can learn about evil new droids and look at photos of Luke glaring in a dark, sort of Sith-y get-up all day, but chances are we won’t really know what’s going on until the movie warps into theaters on December 15, 2017.