It really was too good to be true. 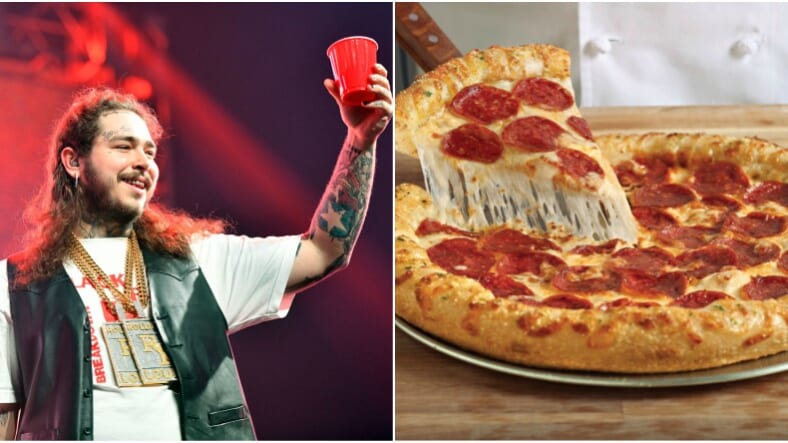 It turns out that chart-topping rapper Post Malone isn’t having a hilarious Twitter beef with Domino’s Pizza after all.

You may have seen a widely-shared screenshot of an apparent exchange between Malone and the pizza chain on Twitter.

The Domino’s Twitter account had supposedly made a pizza-themed parody of lyrics to Malone’s chart-topping hit, “Rockstar,” to which he responded, “Never fucking do that again.”

As awesome as it would have been for the pizza giant to get utterly owned after trying to cash in on the party anthem, it’s all a clever hoax.

The most common version of the fake screenshot is watermarked with “IG: will_ent” and appears to have spread from that Instagram profile to others.

The screenshot has gone viral across social media. The account @MeninistTweet, which has 1.68 million followers, tweeted it and received 72,000 retweets and 250,000 likes.

The real Malone set the record straight in a response to Meninist’s tweet, saying that he, in fact, loves Domino’s.

this fucked up, i didn't say this because i love dominos 😔

That didn’t stop the image from going crazy-viral.

Post Malone, who headlines the 2018 Maxim Party in Minneapolis during Super Bowl weekend, was one of the biggest breakout pop stars of 2017.

Billboard recently broke down how Malone went from relatively obscure rapper to a global pop sensation after opening for Justin Bieber and blowing up on Spotify.

As recently as last December, rapper Post Malone was at risk of becoming a one-hit wonder. His breakout single, “White Iverson,” had made fans of Wiz Khalifa and Mac Miller and sent him on tour with Justin Bieber, but with the release of his debut album, Stoney, fast approaching and no new songs connecting with listeners, the future looked uncertain.

Then came “Congratulations,” the LP’s fifth single that, when officially released in January, began to explode on streaming services. By July, the Quavo-featuring song had peaked at No. 8 on the Billboard Hot 100, and to date it has been streamed over 1 billion times across all platforms.

It also cemented Malone as a legitimate force in hip-hop — so much so that in September, when he released “Rockstar,” the first single from his forthcoming album, Beerbongs and Bentleys, the track (featuring 21 Savage) reached No. 1 on the Hot 100, where it remained for eight weeks.

Check out “Rockstar” and get up to speed with some of the rapper’s other hits here: