“Apparently we’re not there yet to have a female president or a female James Bond in the world, but I think one day we should.” 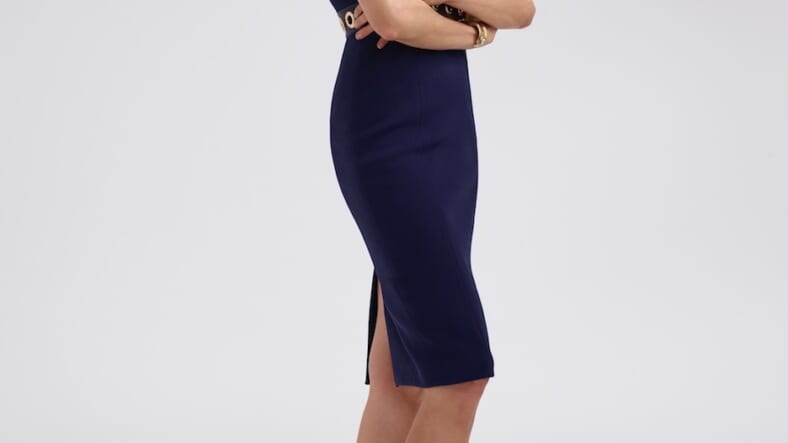 Standing at a towering 6 feet tall, speaking in the low and gravelly voice of an old-school film noir siren and possessing an otherworldly sculptural visage, Famke Janssen casts a formidable presence.

When NBC endeavored to spinoff its crime thriller series The Blacklist, their search for a lead who could match the sordid charisma of James Spader’s character “Red” ended with the striking Dutch-born actress. Who else to lead The Blacklist: Redemption than the woman who sadistically crushed men between her legs in the Bond flick GoldenEye or who squared off with Magneto as Jean Grey in the original X-Men franchise?

“I am actually not much of an action star,” Famke told us, without a trace of irony. “Think about it: In Taken, I get taken. In X-Men, I barely lift a finger to make big things happen. And in Blacklist, you’ve barely seen me in anything other than a dress. I’m not running around shooting guns. I just happen to be in a lot of movies with people who do.”

This is where the casting of Famke as Scottie Hargrave is so essential. Scottie is the brains of the operation, the head of a covert military intelligence organization, Halcyon, that finishes the messy jobs the U.S. government would prefer not to touch. The series packs plenty of action—as Scottie sends her mercenary operatives across the world—but the real drama comes from Scottie calling the difficult shots, keeping the wheels of her organization turning, and battling with her scruples and personal demons, of which there are many.

It is a role Famke was effectively born to play, having already left such indelible impressions in modern classics like X-Men and Taken while having barely lifted a finger (her words, not ours).

So it was to some surprise that Famke is actually rather soft-spoken and introspective in real life, without the intensity or mercurial nature of her most popular characters. She spoke with us about The Blacklist: Redemption, her transition from film to television, women in Hollywood and why the world needs a female James Bond.

What drew you to the character of Scottie?

She is a multifaceted woman. She’s always unpredictable because we never know where we stand with her. We have seen a very tough side to her, and we have seen an extremely vulnerable side to her. There is her son, who she thought was missing but is alive and spying on her, and her husband, who she thought was dead but is also alive and spewing all these stories about her. We don’t know who speaks the truth there, so there are just a lot of layers to the story and to the character.

Was there any pressure to match the precedent set by James Spader’s character from the original series, Red?

Those are very big shoes to fill, but I don’t like to compare myself to other people… ever. I do my own thing. This is not James Spader vs. me or Red vs. Scottie. They are different shows and different characters, and hopefully people respond to both.

I think of you as a film actress. What turned you towards television?

Good writing, really. I think everyone is turning to TV; you see it across the board. So many actors, writers, directors… you name it… are turning to the medium—whether that be HBO, Netflix, or network TV—because there is great storytelling going on. You have much more time to explore characters, and many more people often see it.

Is TV a better place for women than film?

Absolutely. That’s really where the parts are at the moment. There a very few parts in films right now other than a few action movies, and most people don’t qualify for those parts as actors. They’re usually very young and male-driven vehicles.

You famously spoke out against not being asked back to the X-Men franchise and being recast by a much younger actress, Sophie Turner. Are there still hard feelings there?

I wanna clarify that because I think it was misconstrued. It’s not that I’m upset about not having been asked back. The only thing I said in response to a question was that I said the male parts in the movie—like Magneto or Professor X—have been played by two different age groups of men. We have not seen that with women yet. We haven’t seen a younger and an older Jean Grey. We’ve seen them but not in the same movie, played at the same time. They just tend to replace them with the younger version without the original cast members being there whereas with the men, they’ve just done that differently. That’s the only thing that I commented on.

Since you’re a Bond girl, we gotta ask: Are we overdue for a female James Bond?

So are you anything like these fast-talking, manipulative characters you so often play?

No, I’m nothing like that at all. I’m very quirky; I’m kind of goofy maybe. I’m definitely not like a tough, fast-talking woman, whoever Scottie is. I’m not manipulative or duplicitous. But her vulnerability I can very much relate to.

Lastly, do you remember any of your old Maxim photo shoots?

For more of Famke Janssen, check out The Blacklist: Redemption, which airs Thursdays at 10/9c on NBC.