Game of the Week: Take Down a Cult With the Disturbingly Brilliant ‘Far Cry 5’ 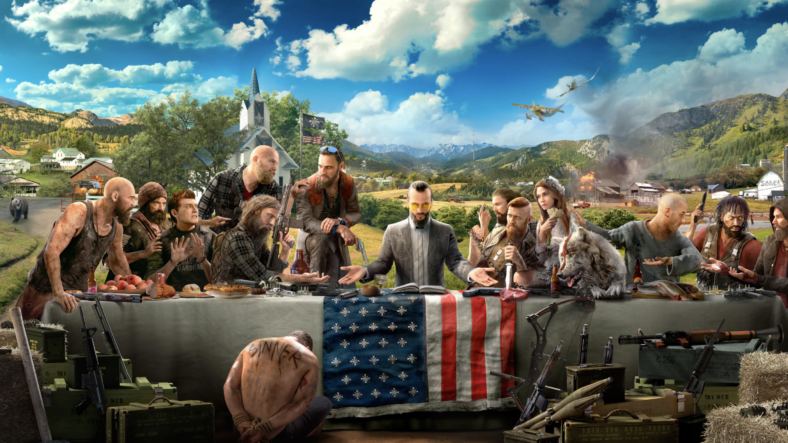 This week is full of high profile video game titles with Far Cry 5, MLB The Show 18 and the co-op gem, A Way Out offering up a variety of ways to exercise your thumbs—solo or with friends.

Ubisoft always seems to use its Far Cry series as a way to try and push the boundaries of the first-person shooter genre, and Far Cry 5 is the latest adventure that explores both a new story and gameplay dynamics. Set in a dystopian Montana where a cult has taken the reins, you play as a male or female (your choice, a first for the franchise) sheriff’s deputy who somehow has to maintain order while making sense of a world gone topsy turvy. Ubisoft has definitely used this most recent outing in the Far Cry world as a way of co-opting America’s own lunacy of late.

While it doesn’t always work in terms of poignancy, it does make for an interesting backdrop and memorable moments of action-packed gunplay and general mayhem. Crafting systems return, as does some of Far Cry’s more interesting means of transportation — wingsuit, anyone? — and we’ll gladly eat it up since Far Cry games have been some of the most fun, if not the most realistic, we’ve seen rise up over the past decade. After having the Far Cry games take us to locales ranging from the exotic to the prehistoric, seeing them tackle a version of America that’s not too far off from the current cultural upheaval isn’t all that shocking… but it does make for good gaming. (Buy)

If you want to play an official MLB sanctioned video game, it’s PS4 or nothing. Luckily, without competition, Sony still takes its role as the home for baseball simulation seriously, and The Show is a game that you can rely on to give baseball fans exactly what they want, returning each year better than before. MLB The Show 18 is no exception.

18’s outing has tighter controls, better gameplay, even more stunning graphics and a few stand out modes like Diamond Dynasty and Franchise Mode that will easily hold your attention and more than make up for the stripping away of some more complicated approaches we’ve seen from The Show in the past. We’ll always have a longing love for bygone baseball games like All Star Baseball or RBI Baseball but, in terms of the MLB on a modern system, you can’t go wrong with what Sony is serving up this year. (Buy)

A sneaky addition to the notable games this week, A Way Out is from the studio that brought you Brothers and, man, do those guys know how to make a game to share with a friend. A Way Out is the unusual co-op only game — it cannot be played solo — where two players have to work together to escape from prison and avoid the manhunt that follows. It can be played online or as a couch co-op game but, whichever way you play, you’ll be tied to your character, the smooth-talking Vincent or the pugnacious Leo, and your teammate by the end.

An encouraging element of taking the plunge on a novel game like A Way Out is an unprecedented BOGO aspect, since it only takes one copy of the game for two people to play, even online. We recommend you choose your teammate wisely, though. A gamer on par with yourself will make your playthrough of A Way Out a truly shared experience, but a subpar partner will make it feel like a slog. Make it count. (Buy)