Time to blow up some aliens. 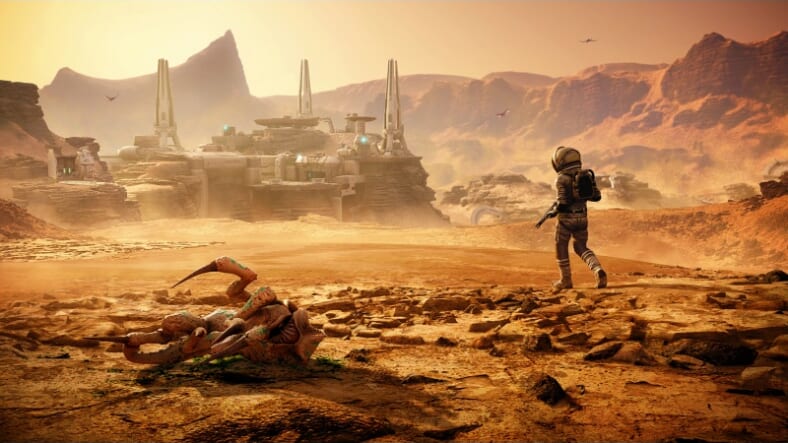 The Far Cry games owe their longevity to two things: excellent first-person gunplay and plenty of opportunities for players to fight their way out of (sometimes literally) insane situations. The core gameplay of the latest, Far Cry 5, is a prime example of this with its rural Montana setting and cult-driven plot — but Ubisoft is pushing the boundaries of the series with their latest expansion to FC5, Lost On Mars.

Taking you wholly out of the original setting, Lost In Mars is prefaced by a slick looking cut scene that explains your transportation to outer space and tasks you with helping an AI gain control over the red planet. The opportunity presents you with an entirely different world, a dozen new weapons and a huge variety of new, alien enemies to use them on. Oh yeah, you also get a jetpack. How could you be expected to traverse the Martian landscape otherwise?

All these elements come together to make Lost On Mars a worthy addition to the Far Cry name. The sweeping red landscape is littered with missions to accomplish and places to explore. The arsenal — entirely different from the original game’s — also acts alien, requiring cooldowns instead of reloads and forcing you not to rely on a single gun and enjoy the variety instead.

It’s a good thing too, because the alien enemies, many of which look like they were ripped from the bugs of Starship Troopers, are big and bad. Their menacing looks and ability to pop up from anywhere on the planet’s surface are only trumped by the way they soak up shots from your blasters. Adding the jetpack also perfectly captures the Far Cry spirit while also proving to be a clever addition to your combat style.

Completionists should find six or seven hours of gameplay in the Lost On Mars expansion and every bit of it is a worthwhile romp through an entirely new space in the Far Cry universe. It’s a must-play for fans of the series who’ll welcome the new world to explore and certainly worth a pick up if you’re looking for an example of Ubisoft’s trademark imagination making it into another Far Cry game. (Buy)