You can’t kill an appetite for the undead. 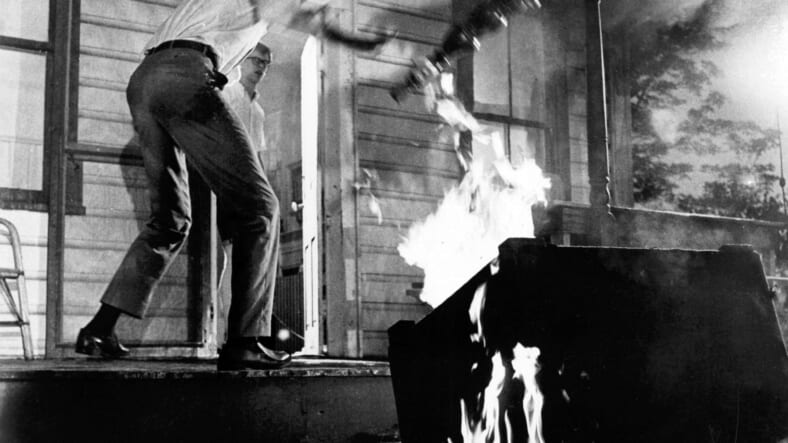 Fear The Walking Dead returns for Season 2 on April 10. We left off on The Walking Dead prequel ending its first micro-season with the sad death of a main character, but from the early reviews it looks like the new season doesn’t pick up exactly where it left off. That an existing zombie TV show got a spinoff while it was still on the air is a testament to audiences’ insatiable appetite for stories about the undead. Here are some of our favorite zombie movies and TV shows:

Night of the Living Dead

The zombie movie that got it all started, George Romero’s Night of the Living Dead, followed a family mourning the death of their father who find themselves pursued by a bunch of re-animated corpses. The egregiously gory movie, which is set in Pennsylvania, premiered as a matinee at a Pittsburgh theater, before the MPAA rating system was put in place, traumatizing the unsuspecting children and teens in the audience. (Roger Ebert was there, and wrote about it.)

Shaun of the Dead

A spoof of Romero’s follow up to Night of the Living Dead, Dawn of the Dead, Edgar Wright’s horror-comedy follows a directionless electronics salesman who has to fight a zombie apocalypse as his personal life is falling apart.

Invasion of the Body Snatchers

The pod people in Invasion of the Body Snatchers weren’t technically the zombies we’re used to, but these emotionless, soulless carbon copies of human beings proliferated like zombies do and caused similar havoc. “You’re next!!”

Danny Boyle’s post-apocalyptic horror movie modernized the zombie genre and won widespread critical acclaim. The source of the zombie epidemic is a chimpanzee used for scientific experiments who was released by animal activists, and subsequently bit and infected one of the activists. This movie was not endorsed by PETA.

Arnold Schwarzenegger plays the loving father of an infected teenager (Abigail Breslin) as she slowly but surely transforms from the apple of his eye to a creature who wants to take a bite out of him. A rather tragic zombie apocalypse story.

This movie franchise, based on the video game of the same name, is about the fallout when a genetically-engineered virus falls into the wrong hands, resulting in a zombie apocalypse. It’s rather silly, but is nonetheless one of the highest-grossing movie franchise based on a video game. Maybe because of Milla Jovovich.

12 seconds to zombie! Brad Pitt stars as a former UN ambassador fighting a global zombie pandemic in the highest-grossing zombie movie of all time. Once bitten by rapidly proliferating zombies, a person will turn into a zombie herself unless the area of the bite is amputated — ok if it’s your hand, more problematic if your face.

In this wildly popular AMC series, the zombie apocalypse gets more brutal with each season — and more infuriating for the fans, who have had to see their favorite characters succumb as the diminishing group of survivors is forever in frantic search of a safe haven.

The Syfy drama’s story takes place three years after a zombie apocalypse wiped out every infected human save one: Murphy, a prison inmate who alone carries the antibody that can save humanity from near-certain demise. But he’s hiding a secret that is almost as threatening as the zombie virus.

In this A&E adaptation of the French series Les Revenants, the undead return just as they appeared in life. It’s much higher minded than your typical zombie story, and even more chilling.

This CW comedy series follows an overachieving medical resident, Olivia, who is turned into a zombie after attending a party that went very wrong. But she’s not interested in living in the world of the undead, so continues to pass herself off a human — satisfying her zombie appetite by taking a job at a morgue.