At least there were guns and bombs. 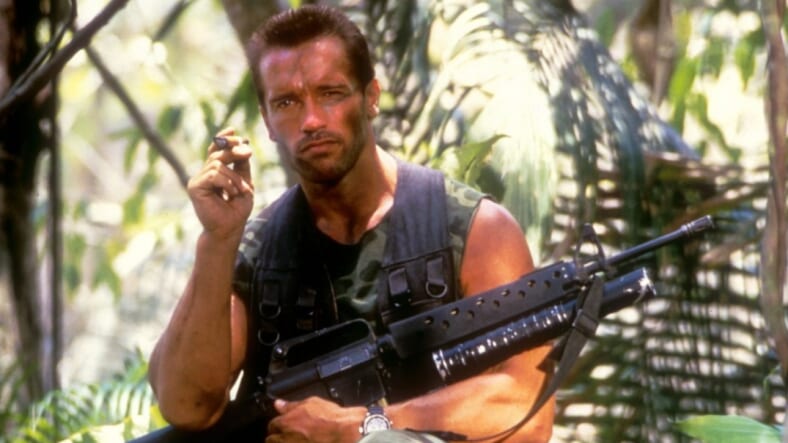 We knew just from seeing the movie that there was no way that making Arnold Schwarzenegger‘s sci-fi horror classic Predator was a walk in the park. People had to suffer to create an experience that intense.

Well, holy hell, did they ever. In this comprehensive oral history of the making of Predator from The Hollywood Reporter, a couple of the actors made it clear that if they looked ragged-out on screen, that was just their normal state at the time.

Chaves said the cast was on a break after rehearsing in the “raw jungle” and he decided to take a breather and sit. That was a bad idea. In a moment, Chaves said, “I am covered in red ants.”

The actor was “bitten almost 100 times” on his arms, he said, and then he went into shock. Horrible as that sounds, Chaves’s immediate solution to the ant attack was kind of funny. He stripped “butt naked,” he said, and: “They had a water tank, and I went into the water tank and just doused myself.”

He didn’t get a lot of sympathy, either. “And I’ll never forget when the Mexican doctor came,” said Chaves, “and I have these welts, and he looked at it and he says to me, ‘You know, I never seen anything like this before’!”

Even worse, according to Duke: “We’re talking about having to wear this gear that is heavy itself, and then the guns and stuff, and mine was like a gun off a battleship machine gun. So you’re carrying your body weight, you have clothing on, and then you’re crawling through the jungle on your stomach and there are coral snakes and spiders and scorpions and a lot of different things.”

If you’ve ever watched an action-filled movie like Predator and thought all the explosions, gunfire, and general badassery looked fun, it looks like we now know the truth. It’s not fun all.

At least where the actors are concerned they get to take home some big, fat paychecks to make up for all the hassle.