Watch The Stunning Final Trailer For ‘The Irishman’ Here 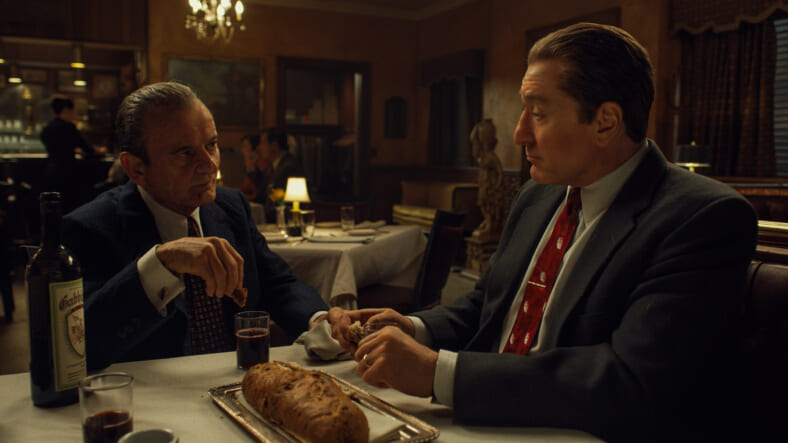 The most heavily-anticipated release date in Netflix history is upon us. That’s because Nov. 27 is when we can all finally stream Martin Scorsese’s The Irishman, the brilliant, sprawling, 3-and-a-half-hour gangster epic anchored by searing performances by Robert De Niro, Joe Pesci and Al Pacino, who plays doomed labor leader Jimmy Hoffa.

De Niro portrays WWII veteran Frank Sheeran, a hustler turned hitman who worked alongside some of the most notorious crime figure of the 20th century, including Pesci’s cold-blooded crime boss Russell Bufalino.

The trailer above is the final teaser before next week’s Netflix release, and it reveals some pivotal scenes, including a CGI de-aged young De Niro, Sheeran meeting Bufalino, and Sheerhan’s first phone conversation with Hoffa, who Sheeran tells: “Whatever you need me to do, I’m available.” Sheeran is also seen being grilled by the feds as an old man in a nursing home: “It’s over. They’re all gone, Frank. It’s time to say what happened.”

While the movie is an absolute must-see and very likely the film event of the year, it has a considerably slower and more measured pace than previous Scorsese mob movies like Goodfellas and Casino, despite what the action-packed trailer might suggest.

Given it’s impressively grand scope, The Irishman might even remind some viewers of The Godfather. The good news is, watching it from the comfort of your couch with a pause button for bathroom and snack breaks might even be preferable to sitting in a crowded theater for three-and-a-half hours, as many did during the film’s limited theatrical release.

Check out The Irishman when it streams on Netflix beginning November 27.