Can a complete GOT novice make sense of the season 2 finale? Nope. 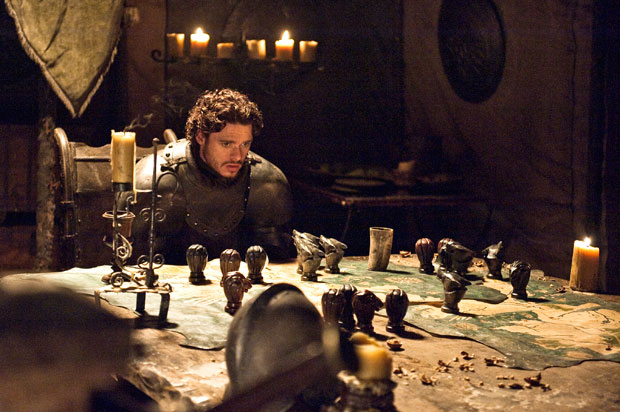 Can a complete GOT novice make sense of the season 2 finale? Nope.

Photo by Helen Sloane / HBO | Licensed to Alpha Media Group 2012It takes charts, documents, a graphing calculator and your complete undivided attention to make sense of HBO’s Game of Thrones. So what happens when we asked a Maxim editor who has never read or seen Game of Thrones to review the Season 2 finale? You get this.
I have no idea what’s going on. There seems to be a variety of ecosystems all near each other: jungle, snow, desert. Where the hell is this? It’s like EPCOT.
I guess there was a battle. The little guy was injured, but he’ll live. Way to go, Little Guy! He was great in The Station Agent.
There’s this guy with a moustache. Did they have mustaches like that back then? When was this?
After that there’s all this stuff about a queen and some other girl who will be queen.

Meanwhile (or maybe it’s a flashback?) two guys were walking along the beach and the one is  a virgin. Oh, that blond man was woman!? And then we see people hanging. Poor Lane! (I just watched Mad Men.)
So that’s not Tilda Swinton. Tilda Swinton is not in this episode. She may not be in the show at all.
This guy said, “First time I saw Winterfell…” Is Winterfell a thing? A place? Is it like the suitcase in Pulp Fiction? That guy was really angry at the other guy playing the horn.
Stuff happens and then they kill the old guy.

Photo by Helen Sloane / HBO | Licensed to Alpha Media Group 2012
Cut to…someplace else. The eunuch guy is there delivering some bad news. Peter Dinklage is no longer in power. He’s got a big cut across his face! His girlfriend thinks they should leave King’s Landing. Seems like a good deal, they’d eat, drink and fuck. He doesn’t want to go, though. She seems loyal, she’s gonna stay with him.
More marriage stuff! These two people said weird vows. What the hell does that all mean? Was it a secret wedding? Who are those people?
Some boys are walking around and see the guy with the long hair and no beard. The beardless guy gives the boy a coin that will help…somehow.  What’s their relationship? I have no clue!
Then some other stuff happens. How many people are in this show? It’s like watching a parade of dirty people.
So there was this blonde woman. She walks around. She opens doors. She finds a smoldering Dave Navarro-looking dude with a weird beard holding a baby. Is this heaven? A dream? Even the baby has a strange haircut.


Photo by Helen Sloane / HBO | Licensed to Alpha Media Group 2012
She leaves! Why?
Aw, baby dragons.
There are these creepy twin bad guys. Maybe they’re triplets. Maybe it’s just one guy. I don’t care. The blonde then leaves to go back to her people.
There’s a group being let through the frozen wilderness by the snow sandpeople. The young guy kills the old guy! He called his mom a whore! What did he whisper before dying? Eh…probably not important.
The redhead is hot. They’re going to meet the king behind the wall. Oh, and they burn the old guy. Can he really come back from the dead?
A couple is sleeping in bed and there’s this black guy there.  So it’s not all white people in Game of Thrones land. The blonde lady storms into their bedchamber. They open a big vault and find nothing. She puts the couple in there. Harsh! They loot the place, and she’s now buddies with the baby dragons. Time to buy a ship!

Photo by Helen Sloane / HBO | Licensed to Alpha Media Group 2012
Back in the wilderness, three guys heard three horn blasts. What does that mean? They left the fat guy behind. He sees something and hides behind a rock. Oh shit, are these zombies? And zombie horses? Really creepy white ghost dude sees him. He’s got a whole army! Holy crap!
The EndWhat I Learned:
There are no decent barbers in Winterfell.
If you can get the gods to back you up, you’re golden.
How to spell “eunuch.”
It’s OK to make fun of little people if your show is all old-timey.
Don’t give long, inspiring speeches before a battle.
Baby dragons are cute.
Putting on Game of Thrones is a good way to get your girlfriend to leave the room.