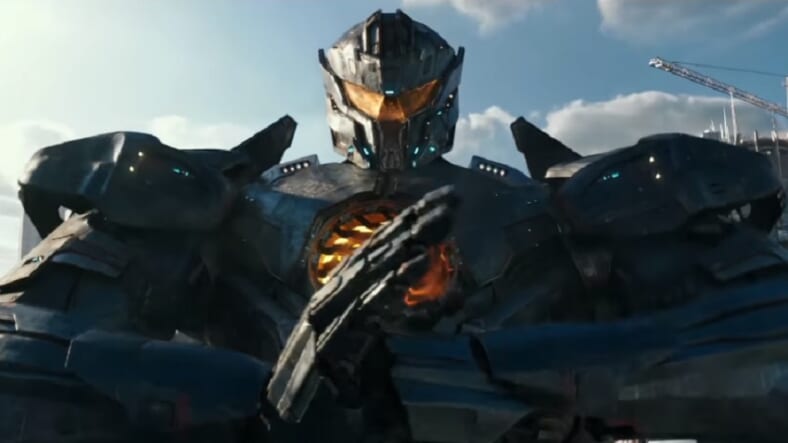 If the tone of the trailer that just dropped today at New York Comic Con is any indication, moviegoers are in for an even more jacked-up giant fighting experience than before.

Uprising stars Force Awakens lead John Boyega as the son of Idris Elba’s character from the first film. Here’s part of the movie’s synopsis, per ScreenRant:

[When] an even more unstoppable threat is unleashed to tear through our cities and bring the world to its knees, he is given one last chance to live up to his father’s legacy by his estranged sister, Mako Mori (Rinko Kikuchi)—who is leading a brave new generation of pilots that have grown up in the shadow of war. As they seek justice for the fallen, their only hope is to unite together in a global uprising against the forces of extinction.
Jake is joined by gifted rival pilot Lambert (The Fate of the Furious’ Scott Eastwood) and 15-year-old Jaeger hacker Amara (newcomer Cailee Spaeny), as the heroes of the PPDC become the only family he has left. Rising up to become the most powerful defense force to ever walk the earth, they will set course for a spectacular all-new adventure on a towering scale.

The first movie wasn’t a massive hit in the U.S. It had del Toro’s loyal fan following behind it, but he ultimately dropped out of the second movie, and it was taken over by Steven S. DeKnight, whose background has mostly been in TV—albeit with well-received shows like Daredevil.

Will Uprising be the rare instance of a sequel outdoing the original? Following in del Toro’s footsteps is a pretty big challenge.

But if this admittedly thrilling trailer is any indication, audiences might be in for a truly killer, gigantic monster-bashing good time.