Five Fast Facts on the Indy 500 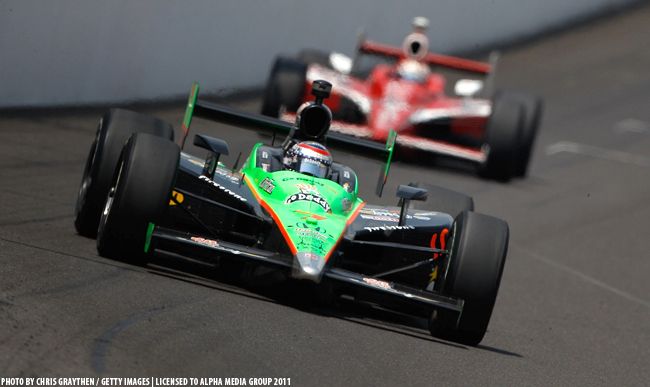 The first winner was…
Ray Harroun, in a Marmon “Wasp”…maybe. Says Charles Leerhsen, author of Blood and Smoke: A True Tale of Mystery, Mayhem and the Birth of the Indy 500, “The first race was utter confusion. There was no way to keep track of who was on what lap. The newspapers accepted it when the publicity people told them the winner was Harroun, who happened to be driving a car made in Indianapolis by a friend of the event organizer.”Fast Women
Aside from Danica Patrick (third in ’09), Brazilian Ana Beatriz Bia is also a contender in the race, says Yahoo! racing expert Jay Hart. “Danica’s forte is oval track racing: pedal to the metal. Ana’s team is underfunded, but she’s the real deal.”She’s a Brick House
The original surface of IMS was tar and pebbles, but in 1909 it was resurfaced with 3.2 million bricks. Today a 36-inch strip of said bricks, the Yard of Bricks, serves as the start and finish line. In 1996 Dale Jarrett began the tradition of kissing the bricks after winning the Brickhouse 400. Brick it on!Take a long look: This is the last year Indy cars will look like this. New aerokit designs will debut in 2012, and Chevrolet and Lotus will join Honda in providing engines.The Big Race—Literally!
Churchill Downs, Yankee Stadium, the Rose Bowl, and the Roman Colosseum could all fit inside the IMS oval, which covers 253 acres.Watch the fast fury May 29 at Noon Eastern time on ABC.