8 Burning-Hot Reasons NOT to Try a Flaming Shot, the Dumb and Dangerous New Drinking Trend 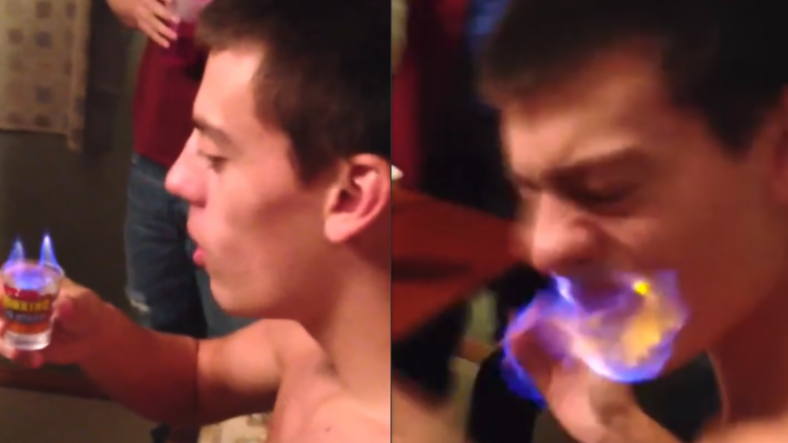 Hopefully this isn’t a news flash, but booze is extremely combustible. In fact, the term “alcohol” is shorthand for ethyl alcohol, aka ethanol—the stuff you find mixed in with gasoline at just about every Shell or BP.

Knowing this, no sane person would try, say, lighting a shot of high-proof whiskey on fire before pounding it down. But low and behold, a small number of drunk and/or brain damaged individuals have nearly incinerated themselves doing just that.

The below video posted to the 5th Year Instagram page is what first brought the flaming shot trend to our attention.

It plays out like this: a shot of clear liquid is ignited, a blue flame appears on its surface, dude attempts to take shot, dude fucks up and spews flame all over himself and the kitchen floor.

Another tried a sip and had the good sense to set it down. Unfortunately, he accidentally knocked the shot over in his haste and set the room on fire.

This cocky fella filled a glass to the brim with booze, lit it up, started smoking a cigarette to make it look even “cooler,” and then tried to take a drink. Guess how that turned out…

We’re not sure what’s worse—igniting your crotch or your face.

We’ll go easy on this guy since he channeled his inner dragon and blew and epic fireball in the middle of his panicked frenzy.

Sometimes, it’s not the shot-taker who gets burned—it’s the drunk buddy yelling at him from across the room. Talk about collateral damage.

Even in the steady hands of a sober bartender, flaming shots can total disasters.

If you still insist on trying a flaming shot, the trick is to add a 1/4 oz. float of high-proof spirit—like Bacardi 151 or Chartreuse—on top of an otherwise nonflammable beverage, like an Irish Car Bomb.

Light it up and watch it burn, but do NOT drink while it’s still on fire. If we still have to say that, you need to see more flaming shot fails: