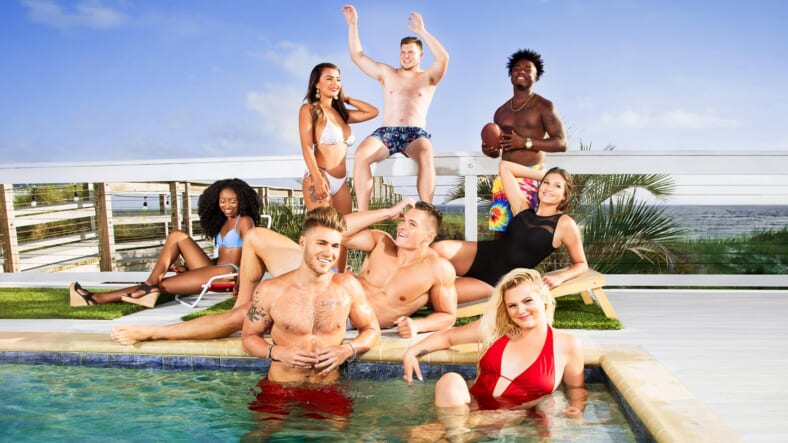 Admit it: there’s been a beer bong-shaped hole in your heart since MTV canceled Jersey Shore in 2012. Although its hair-gelled cast is set to once again pollute the airwaves with Jersey Shore Family Vacation in 2018, the network has resuscitated their gold (chain) mine of the late aughts with Floribama Shore, a reboot set in Panama City Beach, spring break capital of the south.

The two-hour premiere proved that MTV still remembers how to assemble a combustible cast predisposed to blackout-drunk hijinks and hormonal rages (and pleasing producers, natch). A quick primer:

There’s Codi, who wants you to know he’s a good ol’ boy (see: fuschia popped collar) who “can get down ’n’ dirty.”

Candace, who feels washed up at 24 and is here for the noble cause of proving she’s “still young and beautiful enough to find a man.”

Jeremiah, whose specialties include flexing his pecs—maybe something he learned from his stripper dad?—and being a “gentleman and a douchebag at the same time, because that’s what women look for.”

Kirk, the amiable, sensible one who may have a hidden dark side, or else he wouldn’t be on this show. We’re pretty sure he exclaimed “Cheese and Rice” instead of “Jesus Christ” at one point.

Nilsa, the divorced-by-23 Panama City native who drinks and flirts over her emotional pain like it’s an Olympic sport. She feels like marriage made her miss out on life and now she’s single and ready “to show my boobs.”

Kortni, another PCB native and the “baby” of the house at 21 years old. She loves drunk walks on the beach, afternoon tequila shots, peeing in not-toilets, and adult onesies.

Gus, a former cattle farmer with inexplicably fluffy hair who’s not an Instagram model, but “gets that a lot.”

Aimee, perhaps the most stereotypically southern part of a cast of southern stereotypes. She hails from Perdido, Alabama, where everyone goes barefoot and there’s “one stop sign, and it says ‘Whoa.’”

These folks meet in the first episode exactly like all the other strangers-live-in-a-house-they-probably-can’t-afford social experiments of yore—except they all seem oddly comfortable together already, as though MTV started filming a month after they moved in.

Could that be because these practically fetal-aged youngsters have been documenting their lives since they were born via one form of media or another, so what’s the real difference between a constant Snapchat feed and a live-in camera crew?

In any case, their instant comfort with one another could explain why half the house immediately starts dating. Gus puts on a tie (that he saws in half with a camping knife when he realizes it’s too long) and takes his crush, Nilsa, to a fancy dinner, where she mostly rolls her eyes at him.

He ends up highly pained about the fact that the ill-fated dinner, at which Nilsa rejects his every advance (she’s crushing on Jeremiah), cost $150—which maybe helps to explain why he ate a dropped morsel of cheesecake from the floor? Maybe?

Jeremiah hopes to fare a little better on his Hibachi date with Kortni, so he spiffies up with a bowtie and suspenders (Aimee rightly declares he “looks like a four year old on Easter”). He and Kortni have a tinge of chemistry, but by the time she crawls into his bed in a giraffe onesie, he’s already over it. The next day, he formally breaks up with her, about which she’s totally cool, explaining, “I’m not your average fake hoe.” What a relief.

With everyone rightfully single again, it’s time to go clubbing. Among the thumping bass of Club LaVela, which has been the tentpole of Panama City nightlife since I was in high school (a long, long time ago), a jealous Nilsa screams at the new blond, Kayla Jo, that Jeremiah met while working on the beach. (Side note: the whole crew has been assigned jobs in “beach service,” which involves picking up sandy trash and cleaning beach chairs; on their first day, Aimee tells her new boss, “If I could work inside, that would be great.”)

Kortni backs up Nilsa, threatening to knock out Kayla Jo’s two front teeth. Kayla Jo, sufficiently scared off by Jeremiah’s roommates, refuses to go home with him, so he heads home alone to take out his cock-blocked aggression on some dirty dishes, which he fervently washes shirtless.

But by the next night, belligerent-drunk Kortni has morphed into remorseful-drunk Kortni—she may have been sober-Kortni in between, but we wouldn’t bet on it—and she apologizes to Kayla Jo and tells her she has pretty eyes. Kayla Jo finally feels comfortable to flirt openly with Jeremiah—but Nilsa, still jealous, storms off to stew, as Codi reprimands her for being “thottish.”

The episode ends with drunk, tired people screaming at each other, which, along with southern pride, promises to be one of the overarching themes of the series.