The chart-topping country superstars open up about their boozy new venture. 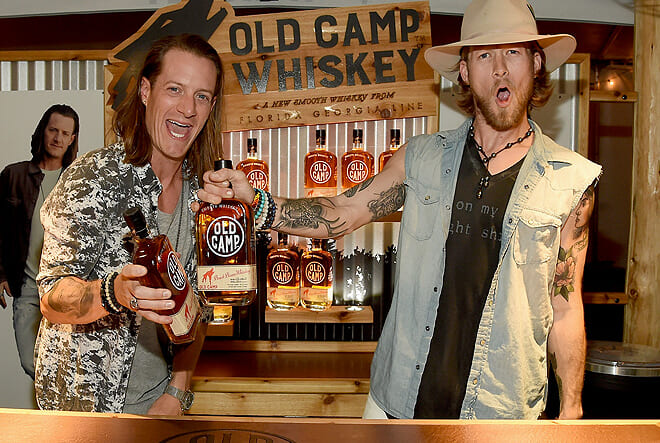 Mashing up radio-ready country with elements of pop, hip-hop and good ol’ southern rock, Florida Georgia Line made massive waves in the music industry with the release of their fist-pumping hit single “Cruise” back in 2012.

Fast-forward nearly five years later, and the down-home duo has hardly slowed down. Aside from putting out three chart-topping records supported by an equal number of sold-out stadium tours, Tyler Hubbard and Brian Kelley have put their impassioned creative drive into producing their very own brand of whiskey, Old Camp.

The succulent peach and pecan-flavored spirit was created for both seasoned sippers and casual drinkers alike, and the two spent the better part of last year crafting it for their personal taste. Now, they’re ready to release it to the masses.

Brian and Tyler had just arrived in Florida to shoot the video for their upcoming single for “God, Your Mama, and Me” (yep, that sweet and syrupy monster hit they recorded with the Backstreet Boys) , but the FGL boys made time to call Maxim to dish on Old Camp, their dream musical partners, and how they really feel about being put in a “bro box.”

“Take a sip of that feel right.” Tag @OldCampWhiskey when you’re sippin’ and show us how much you’re loving that Peach & Pecan. #Whiskey #Smooth #WhiskeyWednesday

You guys are now selling your own whiskey, Old Camp. Why did you decide to get into the liquor game?

Tyler: Man, it was just kind of a natural progression for BK and me. We’ve been drinking whiskey for a while now, and it was just kind of an organic thing that happened. We first developed our own flavor that we could have on the road, and then one thing lead to the next and we decided to go big with it. We like to have our hands in different baskets and do different things to keep it interesting and stay creative.

Brian: I think the flavor, man. I think it’s very unique, and not to mention you get a flavor of Florida and Georgia, which is a little taste of home in every sip for Tyler and me. You get to know us better through our whiskey.

I think the flavor that we went with, the peach pecan, I think it offers a lot to whiskey fans. And even if you don’t like whiskey, we’ve found that people are loving it. Not everyone likes a strong whiskey, but even for people who are into whiskey… the pecan flavor isn’t overdone. We really took our time with it. Like Tyler said, we’re creators at heart, and when we find something that we’re passionate about, we take our time to develop it. In terms of creativity love and passion, we’ve put all of that into Old Camp.

Did you have any prior experience making your own whiskey…or moonshine?

Tyler: Nah, we’ve always just gone out and bought it. It’s never been the sort of passion where we’re going to sit in our basement and try to distill our own whiskey. We do really feel like we did made this whiskey though, because we spent a lot of time trying to develop the flavor over the past year. We really had such a close hand in the flavor development of this whiskey and it just happened to go large-scale.

Brian: No, but we had our hands on the labeling and the images of Old Camp. Our lifelong friend Lance Culbreth actually designed the logo. We’ve had our hands on just a little bit of everything, from the way the bottle looks, to how it feels, to what you see on the packaging—that all comes from us and our team. It’s just like song writing, we’re learning something every day. It’s cool to take these visions and these little dreams and see them materialize.

Are you still able to drink a hell of a lot of whiskey after shows and then pop out of bed in the morning and perform?

Tyler: Yeah, we’ve learned to be responsible with it. We just drink enough water and know when to stop, because we’re playing shows night after night on the road. Sometimes it takes its toll, so we just try to be smart with it. We’ve definitely learned our lessons over the years.

Got any good hangover remedies?

Tyler: I think BC [aspirin] powder and a bottle of water!

Brian: The hangovers nowadays are far and few between, thank the Lord for that. It’s all about keeping a good balance between what you eat, drink and do. But yeah, we try to avoid hangovers at all costs. Like Tyler said, a lot of water helps, and so can Tylenol, but there’s also nothing like some fried chicken and French fries the day after, if you’re really feeling it.

OK, onto the music. You guys spent 18 weeks at number 1 on the country charts with your single, “H.O.L.Y.” After putting out a megahit like that, how do you follow it up?

Tyler: We just try to follow our hearts and use that as motivation to try to release something even bigger. I think “H.O.L.Y.” was a huge stepping stone and a huge career song for us. It’s very exciting, and the door is wide open. Coming out with “May We All” afterwards also kind of opened up some different doors as well. It’s fun coming out with three singles and trying to figure out what direction we want to go in and what’s going to connect with our fans next.

You’ve already recorded with the Backstreet Boys and  Ziggy Marley for the new album. Got any future dream collaborations?

Brian: I think I speak for both of us when I say anyone from Drake to Lil Wayne to Rhianna would be absolutely amazing to work with. Getting in the studio with the Chainsmokers would also be magic. We’re really open-minded when it comes to collaborations. We’ve learned to let things like that happen naturally, because you never really know what’s going to happen. You’ve just got to be patient with it and let the universe conspire with you instead of trying to force it to happen.

Is there anyone you wouldn’t want to work with?

Brian: Nah, man. I can’t think of anyone. The cool thing about being an artist, song writer and creator is you can keep an open mind.

Your music has often been categorized as “bro-country.” Do you hate that label, or do you embrace it?

Tyler: We definitely embrace it, buy we don’t really put ourselves in that box, or any sort of box. We just do our own thing, and we don’t really want to throw a label on our music. Some people call bro-country a sub-genre and give us credit for creating it, and we’ll definitely take it. It’s pretty cool to say that we had that big of an impact on music, but at the same time we’re not putting ourselves in a “bro box.”

Is there anything exciting you have in store for 2017?

The @flagaline boys are never far from a bottle of #OldCampWhiskey. Who's gotten their hands on some Peach Pecan? #Smooth #Whiskey #WhiskeyWednesday

Brian: We’re most excited about headlining our “Dig Your Roots” tour. We really connected with our fans in 2016 and given them something that we’ve never given them before, and in return they’ve given us something that they’ve never given us before, that being a different and new energy. I think we’re taking things to a new level. We’ve got Chris Lane and Dustin Lynch out with us this year, so that’s going to be huge because they’re both popping off. We’re also going to be starting work on our fourth record, starting to get songs cut, and doing what we do man—getting back to work and blowing this thing up.

Check out the Old Camp Whiskey website to find a retailer near you.