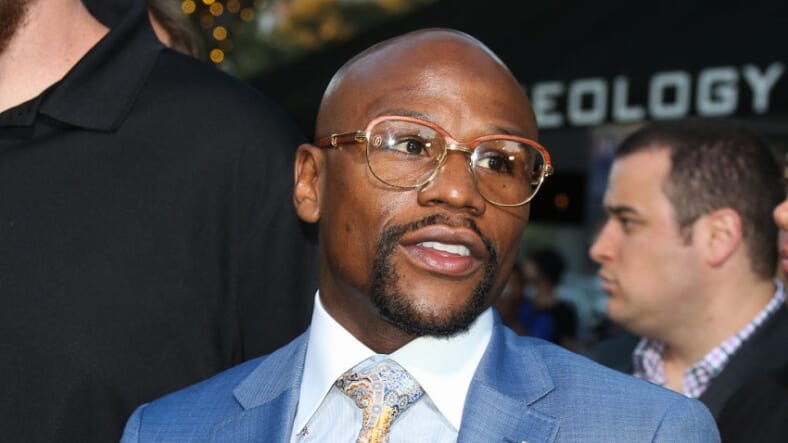 “Well, that works for the individuals that’s doing something illegal. But in my case, I’m happy to flaunt my legal wealth and brag about being a black man that came from poverty, beat all odds and not give a fuck about what anybody thinks. Happy 4th, this is my independence! Now, let the fireworks begin!”

In the video, Mayweather first shows off his diamond chains and a diamond-encrusted Audemars Piguet Arnold Schwarzenegger limited-edition watch (the non-diamond-covered version regularly retails for around $35,000, according to Page Six Style), calling it “a rose gold day.”

“Money” Mayweather goes on to flash more than $1.8 million worth of $100 bills laid out on his dining room table, coolly referring to the section containing $200,000 in $20 bills as “wallpaper.”

“I got this bag from Karl Lagerfeld, RIP, may he rest in peace,” Mayweather says of the late fashion designer.

But 50 Cent, seizing on the fact that Mayweather had quoted the lyrics of Lil Baby and Gunna’s “Drip Too Hard” in his Instagram post, decided to take a shot at his former pal with a post of his own, as the trash-talking rapper often does.

“You can have the biggest Chanel in the store if you want it,” 50 captioned a picture of Floyd wearing the over-the-top accessory. “I don’t think Lil Baby was talking about this dumb shit you bought champ. LOL GET THE FUCK OUTTA HERE! Legendary stupid shit.”

Not exactly a knockout punch on Fitty’s part, as no matter what you think of Floyd, his massive bank account backs up his Instagram braggadocio.