A star is born. 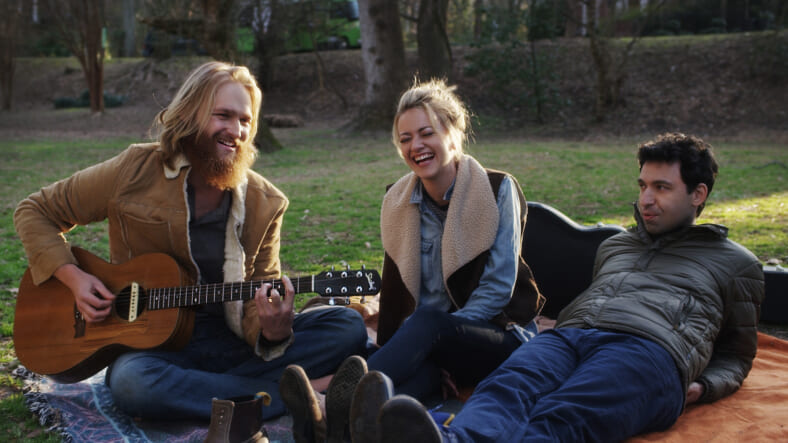 The Kickstarter-launched Folk Hero & Funny Guy premiered at the 2016 Tribeca Film Festival Saturday night, announcing itself as a narrative competition standout. Studios and audiences should also take notice of co-star Wyatt Russell, son of Goldie Hawn and Kurt Russell, a breezily multitalented actor and musician in his breakout year (he also stars in Richard Linklater’s Everybody Wants Some!)

Russell is the movie’s titular folk hero, Jay, who convinces his hard-on-his luck childhood friend Paul (Alex Karpovsky) to open for him on an upcoming east coast tour. If the idea of a stalled comic opening for a sought-after musical act wasn’t awkward enough, the dynamic is further complicated when Jay and Paul happen upon a talented singer-songwriter (Meredith Hagner) at an open mic, and Jay invites her to along for the tour. Why not! Bryn brings a much-needed energy to the tour while also serving as a source of conflict that isn’t quite as predictable as you’d think. Both Hagner and Russell are genuine musical talents and the fictional audience’s response to their performances is completely believable. So is the awkward silence as Paul can’t bring himself to try newer material than a painfully dated Evite joke.

Paul and Jay are both essentially good guys, just as Folk Hero & Funny Guy is a fundamentally good-hearted movie. Jay is warm and welcoming – perhaps to a fault – and Paul remains generally decent in the face of disappointment after disappointment.  And the power dynamic between the friends is impressively equitable given their very different places in life. Neither Jay or the relationship have been unduly impacted by Jay’s career success, and the film slowly reveals that Jay has a pretty serious shortcoming of his own. Folk Hero & Funny Guy is distinctive without being overly quirky; and it’s easy to see that writer-director Jeff Grace was careful to avoid trafficking in stereotypes even as he drew characters that are somewhat familiar. He also treats the women in the story rather well, something you don’t often see in a buddy comedy (in one climactic scene, Paul earnestly chastises Jay for his proprietary view of women, and Jay appears to take the scolding to heart.) But for what’s billed as a road trip movie, the atmosphere of Folk Hero & Funny Guy feels too insular: The locations aren’t recognizable, as the low-budget indie was primarily filmed in and around Atlanta, Georgia though the Boston-bred buddies don’t make it that far south.

Grace, who is also a stand-up comic, based Folk Hero & Funny Guy on his own relationship with his musician friend Adam Ezra,which may account for the care the movie takes in respecting Paul and Jay’s friendship even at its most troubled point. There’s a quiet question as the heart of the story about when it might be time to leave a dream behind. Folk Hero & Funny Guy doesn’t purport to have any easy answers, but it sure is easy to like.