Other rock legends also paid their respects to the legendary rhythm guitarist. 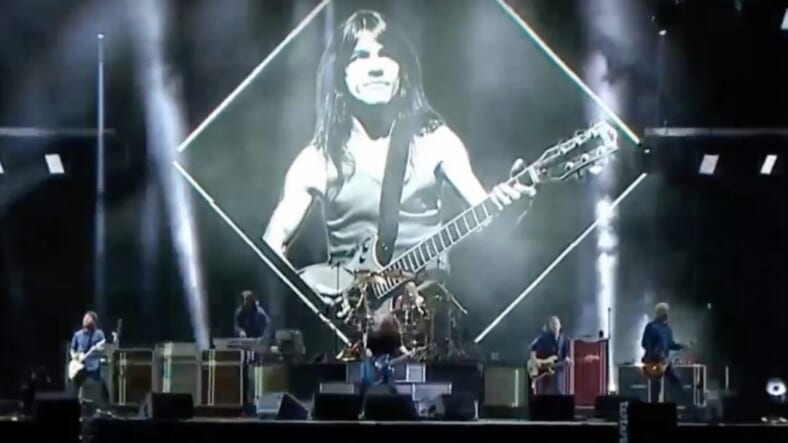 Over the weekend, the rock music community remembered AC/DC guitarist Malcolm Young, who passed away on Saturday. He was 64 years old.

One of the best tributes came from Foo Fighters. To open their set at Mexico’s Corona Capitol Festival, Dave Grohl and company jammed on a seven-minute cover of AC/DC’s “Let There Be Rock.” Watch it above.

“Thank you, Malcolm, for the songs, and the feel, and the cool, and the years of losing control to your rock and roll. I will do just that tonight, for you.”

Guns N’ Roses also took time during their show in Sacramento, California, on Saturday to pay their respects the legendary Australian rocker.

This goes out to Malcolm Young.
He will be sorely missed. pic.twitter.com/gO1mWVuDeR

“We’re gonna dedicate this to Malcolm Young, who will be sorely missed,” Axl Rose said as Slash plucked the chords to Alice Cooper’s “Only Women Bleed.”

Countless other rock stars wrote in memoriam posts on social media. Anthrax’s Scott Ian and Dream Theater’s Mike Portnoy cited Young as one of the best rhythm guitarists of all time.

So sad to learn of the passing of yet another friend, Malcolm Young. He will be sadly missed. God Bless @ACDC pic.twitter.com/HuEp3kCuyQ

It is a sad day in rock and roll. Malcolm Young was my friend and the heart and soul of AC/DC. I had some of the best times of my life with him on our 1984 European tour. He will be missed and my deepest condolences to his family, bandmates and friends.

Wow…just got off stage here in Brisbane Australia (of all places) to the shocking news of Malcolm Young's passing. So sad…one of the great rhythm guitar players of all time. (James Hetfield and Scott Ian would be the 1st to say so themselves…) #RIPMalcolmYoung pic.twitter.com/qZXHIMpktF

RIP to another incredible musician taken too soon.