It was definitely better than the Foo Fighters’ “uncomfortable” experience. 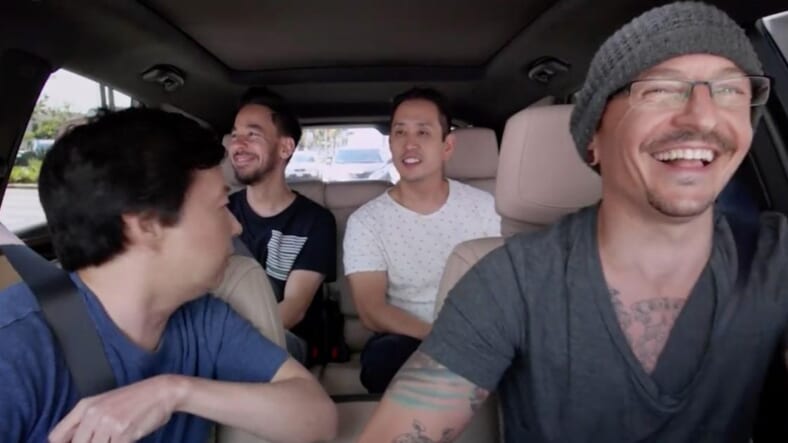 With the blessing of Chester Bennington’s family, Linkin Park has posted their Carpool Karaoke episode to Facebook. It was filmed one week before their singer’s untimely death. Watch it above.

Actor and comedian Ken Jeong joined Mike Shinoda, Joe Hahn and Bennington for the 24-minute segment. The four joke and laugh their way through renditions of “Numb” “In the End” and “Talking to Myself,” in addition to the Red Hot Chili Peppers’ “Under the Bridge” and Outkast’s “Hey Ya.”

The clip ends with an encore performance of “Numb” and a link to the One More Light Foundation, a suicide prevention organization created in honor of Bennington.

While Linkin Park clearly had an awesome time rocking out with Jeong, the same can’t be said about the Foo Fighters’ Carpool Karaoke experience with James Corden.

Days after the release of the Seattle rockers’ ninth studio album, Concrete and Gold, the guys said they were packed into a car with the Late Late Show host for hours on end.

“By hour three in dude’s car it got less fun,” guitarist Pat Smear told NME. “It kinda went on. When we stopped at Guitar Center, that felt like we were done, but it was like ‘this is halfway.'”

Dave Grohl did say that the segment’s eccentric host is a “very nice” guy, but felt strange performing hit tunes such as “All My Life” and “Best of You” without an audience.

“Oh he definitely is [a music lover],” Grohl said. “But y’know, I don’t mind singing my own songs at Glastonbury or The O2, but if I had to sing you a song right now I’d be too embarrassed.”

Hey, at least Corden didn’t wear a wig this time.