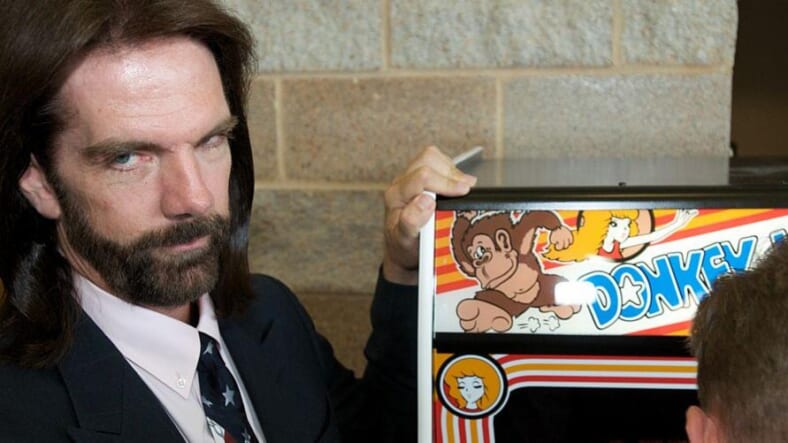 Arcade games still matter. Well, they matter to collectors with the room and the money to spend on them. And one, Donkey Kong, really matters to Billy Mitchell. He’s the former all-time champion a the game, once holding world records for high scores.

Until, that is, Mitchell’s records were stripped from him in 2018 because, according to Ars Technica, he set astonishing 1 million-plus point records “using emulation rather than actual arcade hardware.” That is, he allegedly used an online replica of Donkey Kong to build his points rather than an authentic arcade game.

Mitchell achieved a measure of notoriety when he and his main rival Steve Wiebe were featured in the (actually great) 2007 documentary, The King of Kong: A Fistful of Quarters.

He and Wiebe were featured battling each other for points supremacy in the game and even though he was painted as essentially the villain of the doc, Mitchell won.

But the victory vanished after Mitchell’s win was investigated. He wasn’t just stripped of record-holder status, he was also banned from ever competing again.

Mitchell, who is also something of a hot sauce mogul, said at the time that he’d fight the Guinness Book of World Records and Twin Galaxies game scoreboard over the ban as well as “defamatory statements” he claims they made. Now it looks like Mitchell meant that.

But the core of Mitchell’s more legalistic claims is summarized in a four-page letter sent to Twin Galaxies Monday on the letterhead of Manning & Kass, Ellrod, Ramirzer, Trester LLP. In the letter, Mitchell suggested that he was not provided a “fair opportunity to provide evidence to prove his innocence. Throughout the investigation, Twin Galaxies had a double standard. Specific evidence against Mitchell was accepted, while evidence of equal stature was rejected.”

That’s a lot of trouble to go to over one’s standing as a video game champ, maybe, but the guy committed enough to play the game at a level most humans don’t even realize exists, so it’s not surprising he’s up for the fight.