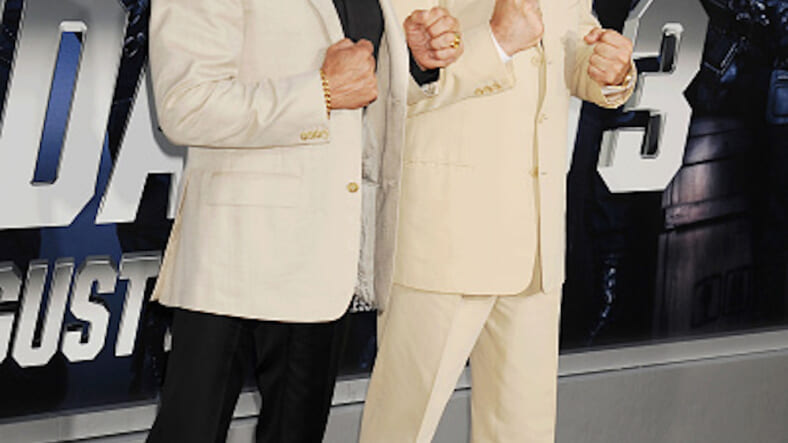 Frank Stallone came out swinging in defense of his big brother after Sylvester Stallone’s Rocky Balboa reprisal in Creed lost the Best Supporting Actor Oscar to an even bigger underdog—Mark Rylance in Bridge of Spies.

Frank, whose career highlights include getting beat up by Mickey Rourke in Barfly and belting out dancey pop-rock tunes for the soundtrack of 1983’s Stayin’ Alive, reacted as many protective brothers would when Sly lost out on his first Oscar nomination since the original Rocky.

Frank wasn’t the only tough guy to bemoan Sly getting passed over. Former frenemy-turned-The Expendables co-star Arnold Schwarzenegger tweeted,”To me, you’re the best, no matter what they say” after the sentimental favorite lost.

.@TheSlyStallone To me, you're the best, no matter what they say. pic.twitter.com/zs4ZLl1nhY

Mario Lopez, the Extra host and noted boxing fan, was firmly in Sly’s corner, too.

Stallone winning was what I was most invested in tonight. Rocky has done so much for people#Robbery #PeoplesChamp pic.twitter.com/CnAEnnTfUc

But it’s unlikely either of them can scrap in a back alley like Frank’s character Eddy the bartender did in 1987’s Barfly, in which the younger Stallone catches a beating from Rourke’s Charles Bukowski-inspired Henry Chinaski.