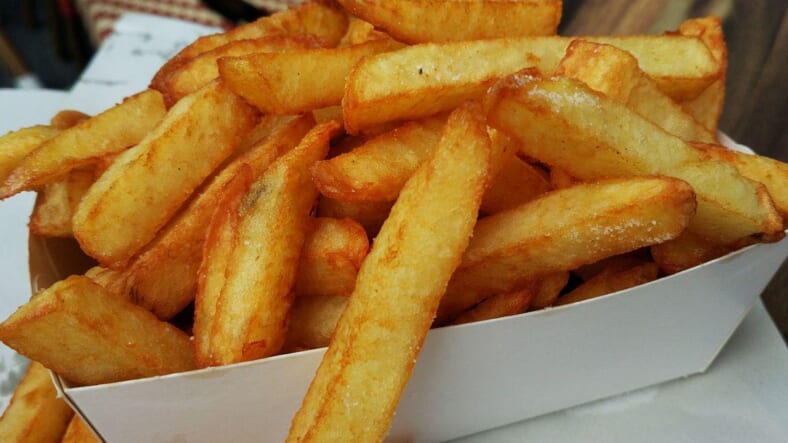 The outrage of the Internet moves swiftly and mercilessly.

Case in point: a recent infographic involving French fries—the one thing you might have thought could unite us across our differences—is dividing the Internet faster than the 2016 Presidential Election did.

A Twitter user named @CriminelleLaw shared an arbitrary ranking of French fries, although it appears @CriminelleLaw did not actually create said list.

*view at your own risk*
This is the most controversial ranking I've ever seen on Twitter. pic.twitter.com/mQLjgIFZEl

What’s more, the metrics for the ranking are entirely unknown. Was crispiness a factor? How about surface area-to-seasoning ratio? We need answers!

See the ranking above and, please, try not to throw your hands up in outrage as you see tater tots were actually ranked ahead of curly fries. I know!

The innocuous little French fry ranker has garnered over 20,000 likes, 11,000 retweets and 1,800 responses. Most of them are, at the nicest, downright irate.

tater tots even being on this list makes my blood boil

Tater tots are not fries. I'll fight them on this.

What? No gravy fries or the king of fries–poutine?

I'm down to go to war over chili cheese fry placementhttps://t.co/jFcrbSgvL3

There are at LEAST eight disqualifyingly horrible opinions on here, but steak below shoestring?! https://t.co/i7HE34El1h

This is INSANITY. Whoever put this together shouldn't be allowed to eat chips, they don't deserve them. https://t.co/aVrEDcsdRH

Role up your sleeves. This one is getting messy.