Four of the city’s topless temples allow gambling inside. 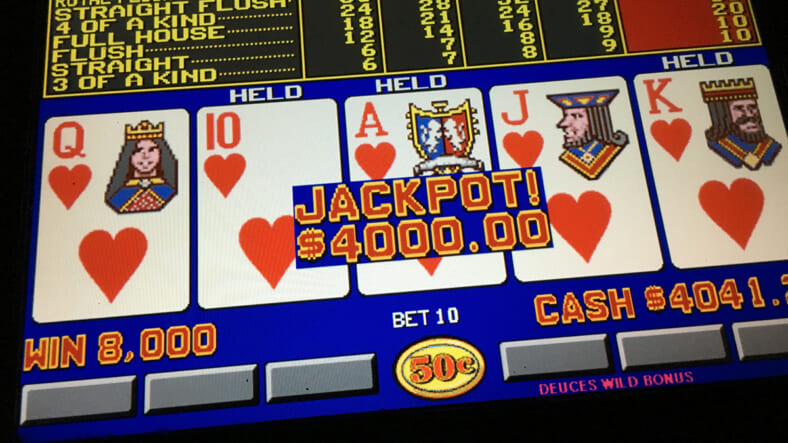 For a brief, shimmering moment, Jimmy T. was living a certain kind of Sin City dream: hanging out with beautiful strippers, drinking beer and winning $4,000 in cash.

Jimmy, a bartender who asked us not to reveal his last name, recently pulled off this triumphant trifecta at a strip club called OG’s on a bleak stretch of Las Vegas Boulevard. Formerly known as Olympic Gardens, OG’s is one of just four jiggle joints in Vegas where you can risk money on lap dances and video poker in the same room – or even at the same time.

Jimmy had fed a total of $40 into the video poker machine, when his five pixilated cards came up as a royal flush. He says it was a slow day, the staff kept his big win on the down-low (even though he had to wait for somebody from the machine company to bring him his cash and a W-9) and OG’s dancers did not benefit from his windfall.

“The bartender was a dick, so we left as soon as I collected the money,” says Jimmy, who credits his OG’s win with igniting a hot streak that saw him make $5,600 on the Alabama vs. Clemson game days later.

“They wouldn’t give us free drinks while we were playing [which is a norm at most Las Vegas bars: one free drink for every $20 that you put into the machine] and then they sent me drinks after I won – because they figured I’d start splashing around money. I tipped the bartender but not well. Then we went to Cheetah’s, another strip club, and I spent $300 on lap dances there.”

Cheetah’s also lacks video poker machines, which is a standard shortfall for non-ancient strip clubs in Las Vegas. Apparently, the Nevada Gaming Commission is unenthusiastic about presenting topless operators with additional avenues for extracting cash from their often blitzed and besotted customers.

Hence, Sophia’s, soon to be the newest strip club in town, will provide no opportunities to win cash, only to blow it on drinks and lap dances.

“We can’t get the gambling machines,” says one Vegas strip club owner, not sounding particularly concerned or surprised. “They have to be grandfathered in for gentlemen’s clubs.”

The club owner also knows that flesh-and-blood strippers generate more cash than poker machines, which can serve as diversions to the real business at hand. And just as some strippers look better than others, some poker machines are more generous than others.

We checked in with Anthony Curtis, publisher of the indispensable Las Vegas Advisor, to pick the most advantageous topless spots for gamblers.

First of all, he says there’s no reason to worry about the video-poker machines in strip clubs being rigged.

“They’re under the same legal scrutiny as anything you’ll find in a casino,” Curtis explains, adding that clubs with gambling are not allowed to charge admission.

“Most machines in strip clubs pay out 95 percent of the money put into them. That’s pretty bad, but you are in a strip club. Right now, the best strip club with a video poker machine is a locals hangout called Play It Again, Sam’s.”

“It pays 7- 1 for a fullhouse and 5 – 1 for a flush [meaning that those hands pay $7 and $5, respectively, for every dollar you wager]. Plus the place has a bunch of flat-screen TVs for watching games, you get free beer while you’re playing and the selection is good: Heineken, Stella, Beck’s.”

“The girls aren’t Spearmint Rhino quality, but you’ll find some hot ones in there and they won’t run any crazy credit card scams on you.”

According to its Twitter account, Play It Again, Sam’s machines have paid out more than $1.75-million—although the place has been open since 1998.

As for the other Vegas strip clubs that allow gambling, it’s a bit of a mixed bag.

“Club Platinum is a tier-3 strip club; the place is down and dirty. Larry’s Villa draws a rough crowd, but I love it there. They have the coldest beer in Vegas and decent machines. OG’s has a lot of rules about playing the machines and they don’t comp drinks.”

If you want to be a stickler about things, Curtis recommends avoiding machines that pay back less than 97 percent of the money inserted and advises that you play slowly.

Either way, he points out, “Compared to the poker machines, the strippers in these places are the bigger gamble for sure. At least with video poker, you know what it will cost you.”