Will she take out the Night King? 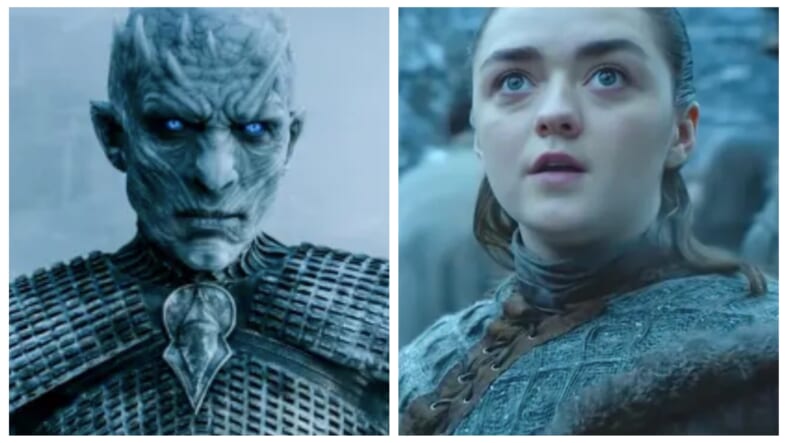 Maisie Williams‘s Arya Stark has had one of the most interesting character arcs in Game of Thrones: Petite and childlike from the beginning, she’s morphed into a remorseless, deadly assassin.

If a recap from the New York Post is correct, Arya may in the end take down the biggest target of all: The Night King.

In the Season 8 open we saw Daenerys and Jon Snow lead the Dothraki army into Winterfell, accompanied by a pair of dragons—and on seeing them soar overhead, Arya Stark was clearly delighted.

Later, Arya reunited with the blacksmith she hung out with in Season 3, Gendry, and this was where a major plot point was put in place. From the Post recap:

[The] Arya and Gendry scene is significant because of what else they discuss.Arya gives Gendry a drawing of a weapon that she wants him to build using rare substances that can kill the zombie-like White Walkers.

It has two parts, so it will function as a kind of javelin-crossbow, a weapon with longer range. Obviously this is a Chekov’s gun that will be used in the future. The question is, how?

For anyone who doesn’t know, Chekov’s gun is a literary device that dictates if you introduce a gun in act 1, you better have someone use that gun (or any significant object) in a later act.

Many fans think Arya — not Jon — will be the one to kill the Night King. After all, since Arya’s storyline has revolved around death, what better way to end it than to have Arya kill death itself, the king of the Army of the Dead?

Dang. Here’s where Arya’s reaction to the dragons becomes relevant. According to Sarner, she could totally use her javelin/crossbow to take down the Night King’s frozen zombie dragon, knocking them both out of the sky and out of commission.

If you are so deeply into Thrones that this makes you go, “woooow, man” like a stoned freshman watching Pink Floyd’s The Wall for the first time, then this could count as a major spoiler for you.

Or not. We could all be wrong with any predictions about this show from here on out.

There are five episodes left. Anything could happen.