Everyone just calm down. 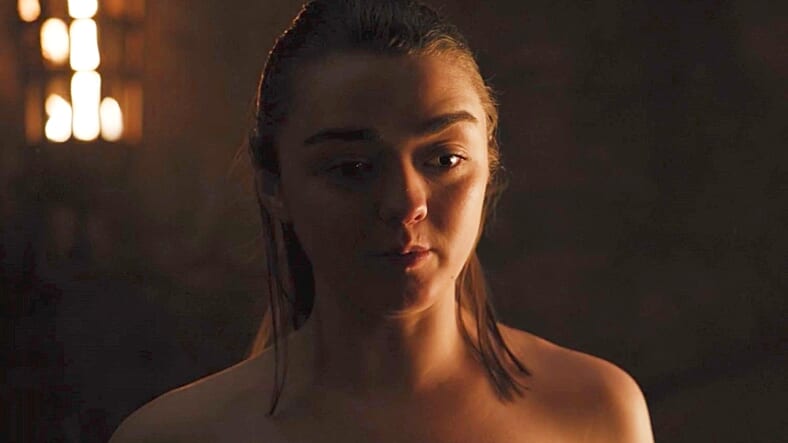 The second episode of Game of Thrones Season 8 rolled out some real surprises, though none of them were particularly gruesome or scary.

Jaime Lannister (Nikolaj Coster-Waldau) was permitted to join the forces at Winterfell despite Dany being anything but a fan; in a surprisingly touching scene, Lady Brienne of Tarth (Gwendoline Christie) became Ser Brienne; Tormund (Kristofer Hivju) admitted to drinking the breast milk of a giantess, because of course he did—and Arya Stark lost her virginity to Gendry (Joe Dempsie).

There was plenty of chatter on social media about all these developments, but nothing sparked quite as wide a variety of reactions as Arya getting her groove on.

Actor Maisie Williams is 22, plenty old enough to do whatever kinds of scenes she wants, but her character has grown up on the show, so some were just plain creeped out.

Arya: Take your trousers off

Of course, some people also had jokes.

find yourself a partner who looks at you the way arya and gendry look at each other throwing big ole fuckin knives #GameofThrones pic.twitter.com/mdEBpAqGFe

There were certainly negative reactions, though some seemed like valid criticism of the writer’s choices in even bothering to put the scene in at all.

The Arya sex scene was stupid and unnecessary, tbh.

Ultimately, it’s a work of fiction. None of these people are real and Arya Stark’s character is younger than Maisie Williams—but still an adult.

But there is that feeling the Thrones showrunners did say at some point, “we need more sex scenes, who’s up?” Psychologically it’s not unknown for people to turn their minds toward the bedroom prior to war, so Arya getting it on with Gendry wasn’t entirely out of nowhere.

Everyone will forget when episode 3 of the final season rolls around next Sunday: That’s when the biggest battle ever filmed for the screen begins. Plenty of the characters highlighted on the second installment will probably be gone when that’s all said and done.