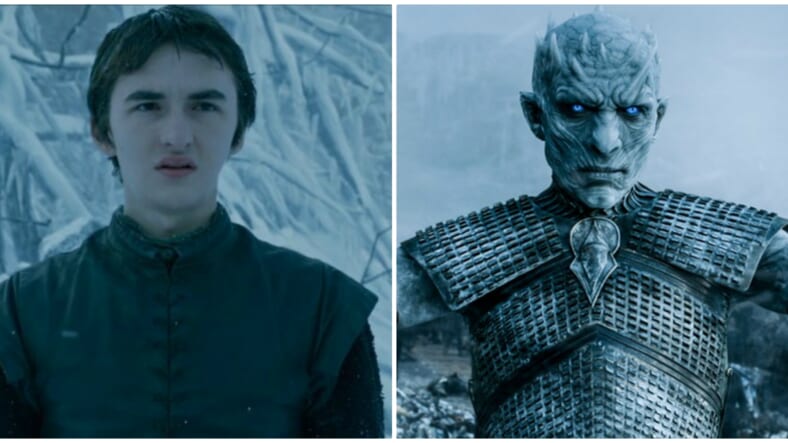 Here’s a question for you: Is Bran Stark the Night King on Game of Thrones?

I know, I know. It sounds crazy and doesn’t make sense. But it’s a theory that has been fucking with diehard fans all week, ahead of the much-anticipated Season 7 finale on Sunday.

At first glance, the theory that a paralyzed boy mystic can also simultaneously be a evil undead ice javelin thrower and dragon slayer is pretty unlikely, but once you read the details, it’ll make so much sense, and maybe you’ll be convinced. Maybe.

Here’s the gist of it: Bran has been using his special powers as the Three-Eyed Raven to travel back in time to specific events in Westeros history in an attempt to make all White Walkers fuck off forever, but he failed epically, and got stuck in the Night King’s body.

It kinda makes sense if you think about it, right? Right?? Eh, maybe it’ll make more sense with a little elaboration.

First off, the voices who told the Mad King to “burn them all” was actually Bran bugging him to burn all the White Walkers, but he fucked up and drove Aerys muy loco, so he burned his own people instead.

When that happened, Bran was like, “My bad, bro,” and went further back in time to try and learn how people managed to kill the White Walkers the first time. However, he arrived just a smidge too late, and inhabited the body of Bran the Builder, distant cousin of Bob the Builder.

Just kidding about the Bob part.

As Bran the Builder, he helped build the Wall to keep White Walkers out, but clearly, the Wall doesn’t do shit. That said, he failed again.

Dammit, Bran!!! Why can’t you do anything right?

In his next incompetent attempt, he went back even further to a time before White Walkers existed, and inhabited the body of the first man the Children of the Forest turned into a White Walker.

By doing so, he hoped to stop the Children of the Forest and their war with man, thereby ending the White Walker threat forever and ever.

However, both Jojen and the Three-Eyed Raven warned Bran, like, 58735 times not to chill in the past in someone else’s body for too long, otherwise he’d get stuck there.

“It is beautiful beneath the sea; stay too long and you drown,” they told him.

“I do what I want!!” Bran probably said back to them, totally disregarding their warning.

That said, Bran fucked up AGAIN and got trapped in the first White Walker, who became the Night King, thanks to Bran flake’s awesome powers.

And those very same powers let him raise the dead, thereby creating the army of the dead, a.k.a. the scary zombies who epitomize all that is scary and unholy.

Bran, you stupid son of a bitch. Someone should have told him that the road to hell is paved with good intentions.

As the Night King, Bran lives for thousands of years, which is why he can see himself in the vision. Then, he kills the Three-Eyed Raven, who has been hiding the truth from him.

And now, since Bran, a.k.a. Night King, a.k.a. Idiot killed Viserion with an ice spear and turned him into a zombie bird, the Three-Eyed Raven’s prophecy about how Bran “will fly” will come true. You know, because he’ll ride the dragon around town and run errands with him.

What do you think? Does any of that sound possible?

If this theory turns out to be true, and Bran is the Night King and vice versa, then Bran deserves an award for the most epic fuckup of all time. It takes serious talent to create the very same problem you were trying to fix.