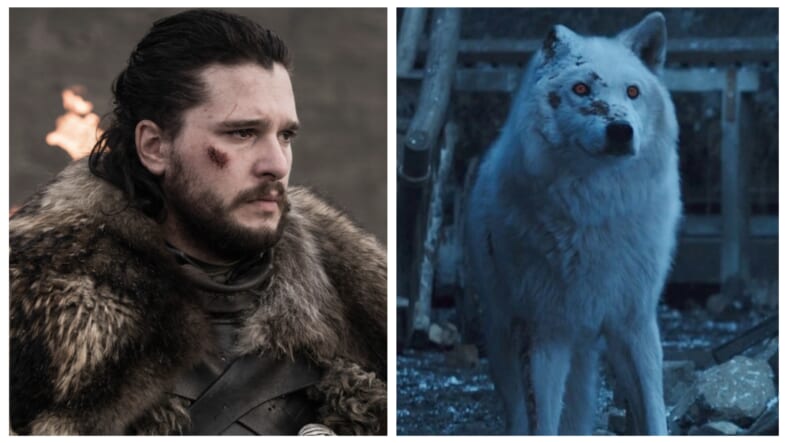 Here’s how you know Game of Thrones has just two new episodes left: People are freaking out over seriously dumb stuff.

Perhaps a perfectly modern cup of coffee sneaking into a scene is a  blooper worth noting. But the question as to why Jon Snow didn’t  pet his beloved direwolf Ghost before saying goodbye forever seems a little beside the point.

In episode 4, Jon (Kit Harington) was about to leave Winterfell. It was a big moment—Jon was prepping to go south with the Army of the North and Daenerys (Emilia Clarke) and saying all his goodbyes. When it came time to commune with Ghost, his wounded and loyal direwolf, Jon simply allowed himself a moment of obvious emotion…then turned and walked away.

It was pitiful, and people responded on social media with mentions of another John who treats dogs with a little more warmth.

Because Ghost is the goodest boi in all of Westeros. And John Wick would have killed for Ghost #GameOfThrones #JusticeForGhost pic.twitter.com/lOI0G0OmPU

Dynamic duo of a lifetime. #JohnWick #Ghost #GOT @JohnWickMovie pic.twitter.com/4Czc1V4brS

“Since the direwolves are kind of CG creations, we felt it best to keep it as simple as possible,” said Nutter. “And I think that it played out much more powerfully that way.”“Game of Thrones” visual effects supervisor Joe Bauer previously explained the difficulties of bringing the direwolves to life ahead of Season 8, saying real wolves need to be filmed and scaled up. And unfortunately, those wolves “only behave in certain ways.”“Keeping Ghost off to the side, I thought that played out better,” said Nutter, adding that it gave Jon a chance to be with Tormund and Gilly before having one last moment with his wolf.

Seems reasonable enough at first, but those direwolves aren’t the only “CG creations” seen on Game of Thrones, and one Twitter user made that point pretty well.

Of course, others argued that this was comparing apples to oranges—and the debate likely continues on Twitter today.

No one doubts Ghost was a very good boy, but In the end, it’s over, and it’s a TV SHOW.

More reasons for frustrated fan outrage will surely surface when episode 5 of Game of Thrones Season 8 airs Sunday on HBO at 9 p.m. ET.