Holy crap this is gonna be amazing. 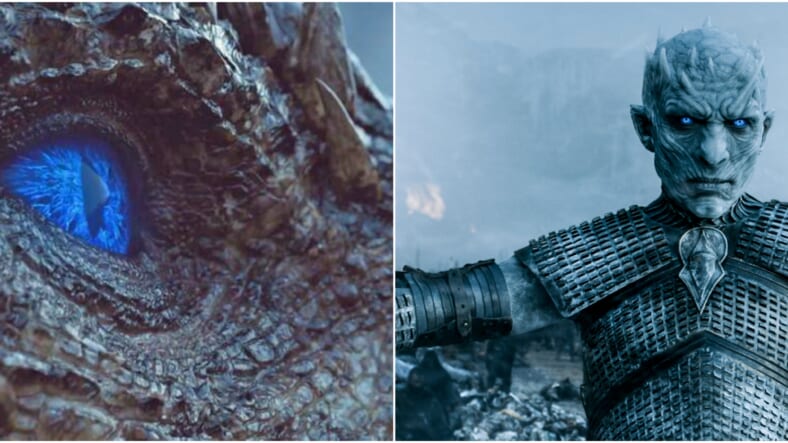 I’m going to start this off by warning you to stop reading if you don’t want any Game of Thrones spoilers, because this post sure as hell may contain them.

Are you still here? Okay, you’ve been warned. I did my duty. Let’s proceed.

On last Sunday’s episode of Game of Thrones, we saw The Night King hurl a freaky ass ice spear right into the dragon Viserion’s esophagus, skewering him like a meaty dragon kebab, and bringing him to the ground, totally dead.

But just when we thought Viserion was dead forever, he was resurrected as a member of the army of the dead, and opened his newly Windex-blue eyes. Welcome to the undead, Viserion!

The fact that Viserion is no longer technically alive is making fans wonder if he’ll still breathe fire, or if one of the other, colder elements will come out of his mouth, considering White Walkers generally prefer the icy temperatures found beyond The Wall.

We won’t know for sure what’s up until the season finale on Sunday, but as UNILAD points out, we can get a pretty good idea of what’s to come from the books the series is based on…specifically, The Ice Dragon.

A passage from the book reads:

The ice dragon was a crystalline white, that shade of white that is so hard and cold that it is almost blue. It was covered with hoarfrost, so when it moved its skin broke and crackled as the crust on the snow crackles beneath a man’s boots, and flakes of rime fell off.

Its eyes were clear and deep and icy.

And when the ice dragon opened its great mouth, and exhaled, it was not fire that came streaming out, the burning sulfurous stink of lesser dragons. The ice dragon breathed cold.

Ice formed when it breathed. Warmth fled. Fires guttered and went out, shriven by the chill. Trees froze through to their slow secret souls, and their limbs turned brittle and cracked from their own weight.

Animals turned blue and whimpered and died, their eyes bulging and their skin covered over with frost.

The ice dragon breathed death into the world; death and quiet and cold.

Holy shit. That’s so badass. Awful, but badass, just like the Night King himself.

There’s also some information on Ice Dragons in the GoT bible, A World of Ice and Fire:

Of all the queer and fabulous denizens of the Shivering Sea, however, the greatest are the ice dragons.

These colossal beasts, many times larger than the dragons of Valyria, are said to be made of living ice, with eyes of pale blue crystal and vast translucent wings through which the moon and stars can be glimpsed as they wheel across the sky.

Whereas common dragons (if any dragon can truly be said to be common) breathe flame, ice dragons supposedly breathe cold, a chill so terrible that it can freeze a man solid in half a heartbeat.

Do you think Viserion is an Ice Dragon now? I kind of hope so. Well, I guess we’ll have to wait until Sunday night to find out.

Speaking of which, the Season 7 finale will be the longest episode the series has ever aired, at 79 minutes, 43 seconds, and title was revealed to be The Dragon and the Wolf, which could mean so many things.

Does it mean Daenerys and Jon Snow will team up and unleash hell? Is it the R+L=J theory, a.k.a. Rhaegar Targaryen (a dragon) + Lyanna Stark (a wolf) = Jon Snow?

We’ll just have to wait until Sunday night to find out.