PLUS: Stephen King reveals how he thinks the series will end. 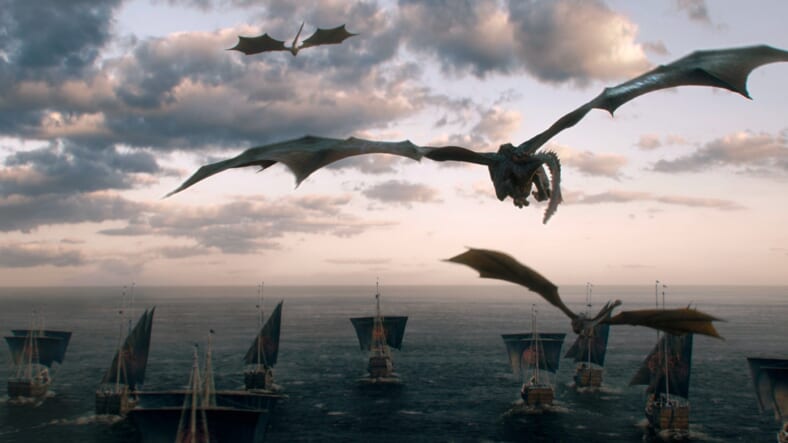 In Episode four of Game of Thrones, Euron whipped out his ginormous crossbow and took out Daenerys’s dragon Rhaegal, leaving Dany with only one dragon considering Viserion, too, died along with the Night King’s army at the Battle of Winterfell.

With two out of three dragons dead, King’s Landing seems to have the upper hand, but an intriguing new fan theory suggests otherwise.

The teaser for episode five shows Euron staring at the sky looking kind of freaked out, potentially about dragons flying around overhead, and fans have a theory that Drogon laid eggs and more dragons are coming.

Building on that theory is the fact that the opening credits for episode four shows a gold inscription with three baby dragons and a big dragon, and a comet flying over them the same way it did when Dany’s first three dragons were born.

So I replayed the intro of episode 4 cos they always leave hidden messages & look at what we have! 3 small dragons & a larger dragon! Also the comet is flying over the same way when the first dragons were born! Could Drogon have laid eggs in season 5!?! #GameofThrones pic.twitter.com/iWDIvIjA8A

Or it might be a completely different massive dragon.

Before she was executed, Missandei’s last word was “dracarys” and may have been foreshadowing the coming of more dragons.

What’s more is that Digital Spy reports that a passage from George R.R. Martin’s source material suggests dragons can be gender fluid, so Drogon actually could have laid eggs.

Aside from the dragon business, Stephen King has his own theory on how the show is going to end and who’ll end up on the Iron Throne:

Of course for years some people have told me I don't know how to end a story. I call bullshit on that, but everyone has an opinion.
🙂

In other words…Tyrion. He’s smart, kind, and would honestly be a great ruler, but we’ll just have to wait and see.