The eyes have it. 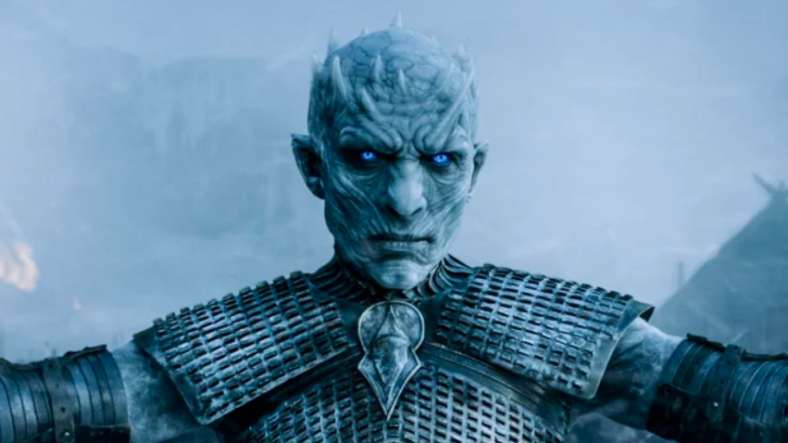 The Night King is the ultimate villain on Game of Thrones. As “First of the White Walkers” he’s leading an army of the dead into the show’s final season, and we know there will finally be some kind of epic mega-battle to come.

So naturally he’s the subject of a lot of speculation, especially after one of Entertainment Weekly‘s collector’s edition covers featured his creepy-ass face. The speculation in this instance is about his supremely weird eyes, and what they could mean.

The Night King’s pupils are seven-pointed stars. It’s a freaky little detail to single out given, well, everything else about him, but BroBible does a good job of explaining how noticing this put ideas into the heads of many among the most hardcore element of the GoT fandom:

The stars in the Night King’s eyes have seven points, which some people think is an allusion to the Faith of the Seven, one of the main religions in Westeros. Its adherents worship seven different spirits—the Father, the Mother, the Maiden, the Crone, the Warrior, the Smith, and the Stranger—the last of which is meant to represent death.As a result, there’s a chance our heroes are currently gearing up for battle against a literal god, which doesn’t exactly bode too well for the final outcome.

So there you go.

You do not actually have to be into the books to the degree that the above is old news to you to understand the significance here. It’s all in the phrase “battle against a literal god.”

One of the biggest episodes of the final season is set to be an alliance of various factions in battle against the Night King. Who in their right minds would want to face off against an actual deity of some kind?

The theory may have legs, then. Either that or the Night King just has some really crazy contact lenses.