‘Game of Thrones’: The Night King’s Fire Spiral Mystery Has Been Solved

The explanation is pretty creepy. 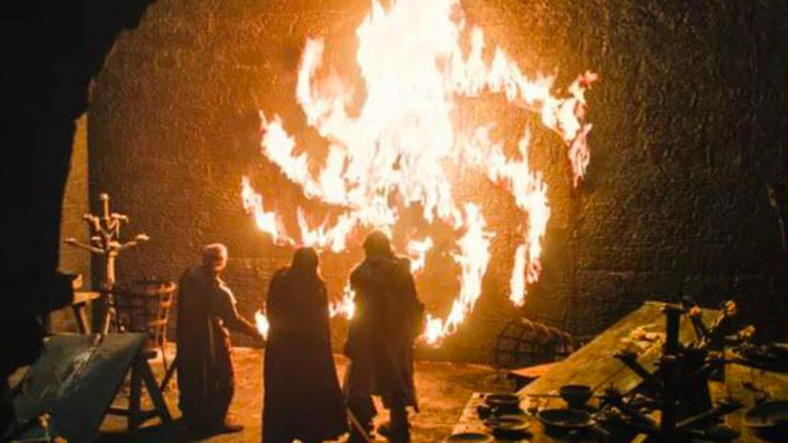 So with the three-eyed ravens, ominous icy zombies, and dragons, Game of Thrones is a totally normal show about normal things, right?

Ha, no. It has scenes like the utterly chilling moment in the first episode of the final season—which premiered on April 14—when a man sets fire with his sword to a spiral of human body parts with an undead child at the center.

The scene stopped many viewers cold because it was so startling and just plain chilling. Many seemed to find it inexplicable as well. Like, we know as the season begins that the forces of the Dothraki and Westeros among others are aligning as best they can to face the Night King’s undead army. A battle is definitely going to happen.

Why bother with this mark left in a chamber already ravaged by the Night King’s horde? In an interview with the Post, Game of Thrones writer Dave Hill did something unusual for any member of the GoT cast or crew and pulled back the veil on that particular scene:

As we saw with Bran and the Three-Eyed Raven, the spiral pattern was sacred to the Children of the Forest, who created the Night King by sacrificing a captured man in a spiral “henge of stones.” The Night King then adopted the symbol as a sort of blasphemy, like Satan with the upside-down cross.

In a way, viewer response to the scene was 100 percent in line with the intention behind the symbol. Satan’s upside-down cross brings to mind The Exorcist, which was one of the most terrifying horror movies ever made.

It is, then, a symbol simply intended to intimidate. It totally worked, too. There will surely be more jolts and jumps like that to come.