‘Game of Thrones’ Season 6, Recapped By Someone Who’s Never Seen the Show

I know nothing, Jon Snow. 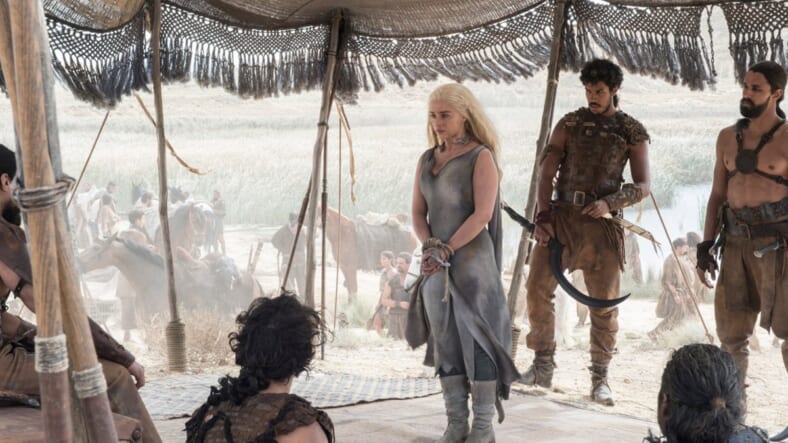 Real talk: I write about TV for a living, but I’ve never watched a full episode of the biggest television show of the decade. Sad! But now in season six, I’ve decided to finally see what this Game of Thrones hysteria is all about. There’s no way I have the time (or the stomach) to watch all five previous seasons, so I’m jumping in at the Season 6 premiere. And because you absorb new ideas and information better when you write them down, I’ve jotted down short thoughts along the way.

My previous knowledge of Game of Thrones is limited to a few character names, ‘The Red Wedding’ (I didn’t watch but I know generally what happened), and that King Joffrey was very, very bad and is very, very dead — by poison, I think. And, of course, the burning question of whether or now Jon Snow is in fact dead.

One of the first things we see in the Season 6 premiere, “The Red Woman,” is Jon Snow’s dead body. A guy says, “He’s gone.” So it looks like he really is dead. Glad that’s cleared up.

Some other guy makes a speech and he’s taking credit for killing Jon Snow, and he’s definitely not sorry, because Jon Snow let the wildings through their gates. “We have all given our lives to the Knight’s Watch,” he says. “Jon Snow was going to destroy the Knight’s Watch.”

Now here’s another dead person, this time a young woman. I know from the catch-up sequence that in an earlier episode two people jumped from the terrace of a castle while holding hands after another woman fell (or was pushed?), so I’m guessing these are some of the same people. Whoever she is, she is quite dead, and the guy talking to her corpse is saying nice things about how much he is going to avenge her and wishes she could be around to see it. BUT THEN HE TELLS THE OTHER GUY TO FEED HER TO THE DOGS? I don’t understand.

Two men are talking about Sansa Stark, who seems to be important.

Two people are running through a snowy forest (I guess Winter Came, hard) and now they have to cross a river which is cold AF. Honestly, I’m surprised the river isn’t completely frozen given how cold it seems to be. But what do I know, this is a land of ice and fire and dragons so perhaps the laws of thermodynamics don’t work here.

OK, so these are the two who jumped from the castle. Some people on horses and a bunch of dogs have come for them and the dude says the girl died in order to protect her. They don’t buy it at all and easily find her and a swordfight ensues. I am definitely rooting for the people who jumped. And they win!

Oh, this is Sansa! One of the soldiers who survived the swordfight turns out to be a lady and she kneels down and pledges her loyalty to Sansa. Some other guy needs to prompt Sansa on what I suppose is an official speech you give to people when you hire them as servants. I guess she’s not used to it?

Here’s Cersei Lannister. I know who she is, she’s the one who is having incest with her brother and I think she was King Joffrey’s mother? Looks like she’s getting used to her new haircut, which I understand wasn’t voluntary. She’s excited about a ship. Is that her incest brother on it? Family reunions in Westeros must be awkward.

Now she seems quite sad. What’s going on?

Cersei is sad about her mother who it sounds like has been dead for a long time. Yep, that’s her brother. Wait, did they have a daughter too? Maybe she was talking about her daughter, not her mother. Apparently a witch told her all the bad things that were going to happen, and they are all coming true. Brother is not having any of this pity party: “Fuck everyone who isn’t us.”

Here’s a girl who looks like she’s in prison or something. She’s asking about her brother, doesn’t seem to give a fuck about her husband. An old man is trying to tell her she did something wrong, but he’s being polite about it.

OK, I did’t expect Game of Thrones to ever be colorful. I thought everything would be snow or dungeon-colored. But here we are a a beautiful castle and everyone is dressed very well in bright colors. Mostly shades of yellow and blue. I would like to have these dresses. Some guy sits in a chair and reads a note and the women in the killer dresses start stabbing people. “You are not our prince,” one of the women says to the guy who used to be in chair as he is bleeding to death.

More great outfits. Two women have come into a dungeon to announce they are going to kill the guy there, he gets to choose which one of them kills him. He chooses one girl but the other girl stabs him in the back of the head. “You’re a greedy bitch,” the one he picked says to the other.

Here’s Peter Dinklage! I know he is Tyrion Lannister, but I don’t know what that means. In my mind he’s a good guy mostly because Dinklage definitely seems like a good guy in real life, but I could be wrong. He’s walking around with a bald guy and tells him he (bald guy) doesn’t have a cock. Not sure if he means that literally.

Apparently they are in a place where people speak Valryian, which sounds like the name of an herbal anti-anxiety supplement. Tyrion offers a homeless-looking woman and her baby money but his Valyrian is terrible and instead he says he wants to eat her baby. The bald guy clears it all up.

Now people are talking about the Mother of The Dragon, which I am guessing is Daenerys Targaryen because I saw that she flew away on a dragon. It looks like she left a lot of her slaves behind, and they are not sure what to do while they wait for her return. Now they’re all running away screaming, and the town/village/kingdom is on fire.

Two guys on horses are talking about Daenerys, and it sounds like the younger one is in love with her. The older guy has an odd-looking pattern on the inside of his arm; unclear if it is a tattoo or an injury or skin condition, but it looks like it’s something he is keeping a secret. They seem to have figured out that Daenerys has been captured.

Yep. She’s got her hands tied together and she’s being led somewhere by a group of men on horses, a couple of whom are whipping her and saying very disrespectful things. I’m rooting for Daenerys. Some people think she’s a witch because of her fair coloring and blue eyes.

A lot of the guys seem to be expecting to have sex with her, but she’s not having it. She tells them she is a Queen and they laugh at her. Then she tells him she used to be married to someone called Khal Drogo and the guy backs off. He unties her hands and for a minute it looks like he is setting her free, but then the women there tell her she has to go live with the widows of other khals.

Here’s Maisie Williams as Arya Stark. She’s blind but didn’t start out that way. She’s panhandling and some girl comes over and starts a stick fight with her, which is sort of brutal but you also get the sense that it’s in Arya’s best interests, like this girl is going to be her sensei.

Two groups of men on either side of a door are talking about hunting and surrendering, and one tells another that he can take the Red Woman with her. “You haven’t seen her do what I’ve seen her do.” Same!

Here we are with the Red Woman. I know what’s going to happen because I read about it on the Internet, just like everyone else. So I guess it’s the necklace that makes her a lot younger. She crawls into bed naked. To die? Unclear. We’ll find out next week.