‘Game of Thrones’ Just Had One Of The Most Epic Battle Scenes Ever, And People Are Still Going Nuts About It 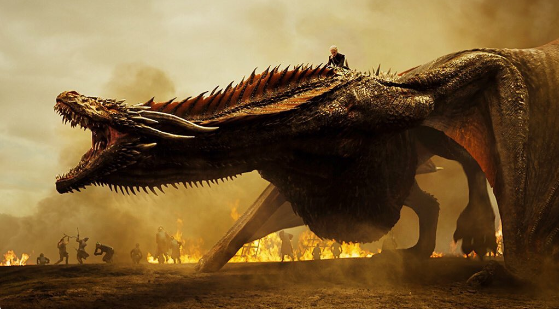 We’re only four episodes in, and Season 7 of Game of Thrones has already been a complete whirlwind of sex, treachery, scheming, and murder.

For starters, Arya killed all of the Freys in the first few minutes of the season, the dickless Grey Worm got laid, Sansa keeps dropping hints that she’s basically turning into Cersei and is going to fuck shit up, and Ed Sheeran made a super lame cameo and ate rabbit with Arya.

And that’s exactly why it was no surprise that last night’s episode sent fans into a frenzy, even though it was the shortest episode of the season, and shit didn’t even hit the fan until the last 10 minutes.

But really, after a fairly lackluster 40 minutes, the last few minutes of the episode were insaaaaane.

SPOILER ALERT! You can go ahead and stop reading if you haven’t watched the episode yet. Or keep reading. Up to you.

Here’s a brief recap of exactly what went down: After their conquest of Highgarden, the Lannister army was marchin’ on home, tired, but loaded with gold. All is well, right? WRONG.

Out of nowhere, Daenerys, her badass dragon Drogon, and her horde of Dothraki rolled in, and messed up the entire Lannister army in a matter of minutes, making for one of the most epic scenes the show has ever seen.

Hell hath no fury like Khaleesi scorned, am I right?

Obviously, when Daenerys showed up to obliterate everyone, the Lannisters were all “Ah, shit. Really, Daenerys?” and didn’t know what the hell to do. They were pretty damn stupefied.

While they were blubbering in shock and trying to figure out a solid game plan, Drogon swooped down and burnt them all to a nice crisp.

Understandably, Jaime looked like he was quite upset by all the violence — almost as if he could not believe that his entire army was being annihilated before his very eyes.

Look at his face!

But when he got pushed off his horse, he fell into some literally unfathomably deep water, where he somehow sank down into the wet clutches of Poseidon. In other words, he died (probably).

Right now, we don’t know exactly which Lannister is alive, and which one bit the dust, but I’m sure we’ll find out next week.

Until then, my friends.