This sh*t is HILARIOUS. 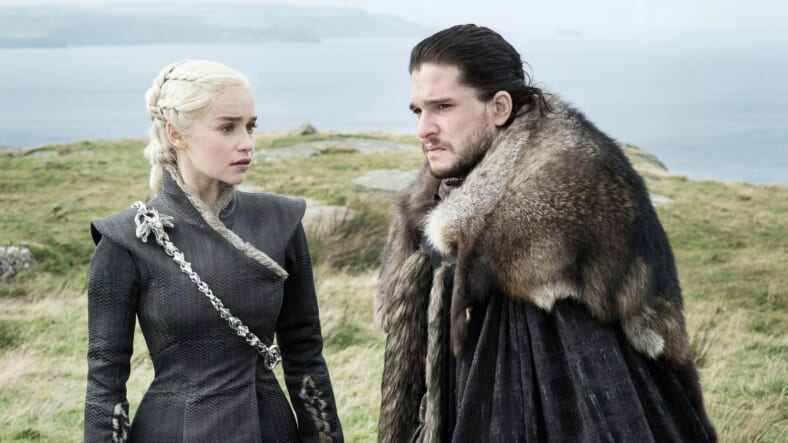 Well, folks, it finally happened. The season 7 finale of Game of Thrones aired Sunday night, and it was bonkers. Insane. Absolutely nuts. And definitely the best episode to date.

So much happened, so many loose ends came together, and we learned some major facts about certain characters, and it was all just so wild that it literally made me choke on my drink at one point.

I won’t recap the entire episode, but what I will do is cover the most important events that transpired in last night’s mind-blowing season finale, so that we can all relive the magic.

If you didn’t watch the finale last night, close this tab immediately and go watch it right now. Not just because this post contains major spoilers, but also because the episode was fucking epic. Trust.

The episode started off with an intense meeting between Cersei, Jaime, Jon Snow, Tyrion, and Daenerys et al, where they all got together to discuss a potential truce in preparation for the upcoming war between the army of the dead and everyone who isn’t in the army of the dead.

To finally show Cersei that White Walkers and wights are very real and very scary, FedEx delivered a cargo box containing the Wight Jon and his fellowship kidnapped, and when homeboy jumped out of that box, Cersei definitely peed herself a little.

And everyone else was clearly shooketh as well, because as Jon sliced the wight in half, burned its arm, and then stabbed it, Euron was like “Nah, I’m good” and noped the fuck out of there real fast.

Then, just as Cersei was about to agree with everyone that a temporary truce might be wise, Jon “I cannot tell a lie” Snow messed it all up and pledged allegiance to his one and only Queen, Daenerys of House Targaryen, in front of Cersei.

Dammit, Jon! Haven’t you ever heard of a little something called a white lie?

Anyway, Cersei didn’t like the whole vibe of the Jon-loves-Dany situation very much and stormed off, but Dany sure did, and was very, very turned on.

Right after the meeting, Cersei once again proved that she is fucking insane, Jaime reevaluated his relationship with her, and was like “Bitch, you CRAZY,” and then we found out that she is, in fact, knocked up.

Going back to the whole thing about Jonny boy getting Dany all hot and bothered, when he showed up at her bedroom door later, she invited him into her boudoir…and it finally happened. Jon fucked his aunt.

When youve been waiting for Dany&Jon to get together and it finally happens-as Bran narrates the story of how theyre related. #GameOfThrones pic.twitter.com/ayxwY3EKpY

House Targaryen got 7 inches of Snow last night, if you know what I mean. Winter definitely came.

Speaking of Jon, we also found out who he really is: His name is Aegon Targaryen, and he is the son of Rhaegar and Lyanna, making him the heir to the Iron Throne.

"His real name is Aegon Targaryen"

On a different note, Sansa held a trial where it looked like she was about to convict Arya of being a maniacal serial killer, but instead, she turned the tables on Littlefinger and accused him of all the vile bullshit he’s been pulling for years, and all three Stark bambinos finally tore him a new one and gave him what he deserved.

When accused of his crimes, Littlefinger was all “Um, you can’t do anything about it because nobody was there to see me do it,” but Bran finally proved he isn’t utterly useless and pulled out all of the receipts, because he is the Three-Eyed Raven.

Littlefinger: None of you were there to see what happened
Bran:#GameOfThrones pic.twitter.com/d1cqpZXfCa

Arya then provided the death blow and shanked the living hell out of Littlefinger with a swift slash to the neck, thereby ending the fool formerly known as Peter Baelish.

He got exactly what was coming to him.

Littlefinger: you have no proof
Bran: pic.twitter.com/8Cs4lx7Edp

The final scene of the episode showed the Night King riding around on a very undead Viserion, with a MASSIVE zombie army just waiting around to attack.

Turns out Viserion is definitely, totally, 100 percent an Ice Dragon, just as fan theories anticipated, because he was shooting ice or laser beams or some scary blue shit from his mouth, absolutely obliterating anything in its path.

That said, Viserion and his cryokinetic powers blasted that wall down like it was a flimsy Jenga tower made of ice cubes, the Night King was like “Bob’s your uncle, we’re in!” and the zombies started marching in, ready to attack our homies in Westeros.

Wow, what an insane episode. I might watch it again because it was so good.

me after that finale #gameofthrones pic.twitter.com/TiXoxRhB4t

Too bad we have to wait two whole years for season 8. It’s going to be a painful to wait that long, but after seeing how epic this season was, it’ll be worth it.

When you realize that may have been the last episode for two years #GameOfThrones #GoTS7 pic.twitter.com/2ezUlEFBHY