Relive The Greatest Moments From The Explosive ‘Game of Thrones’ Finale

Feast on fiery GIFs of the incredible Season Six closer. 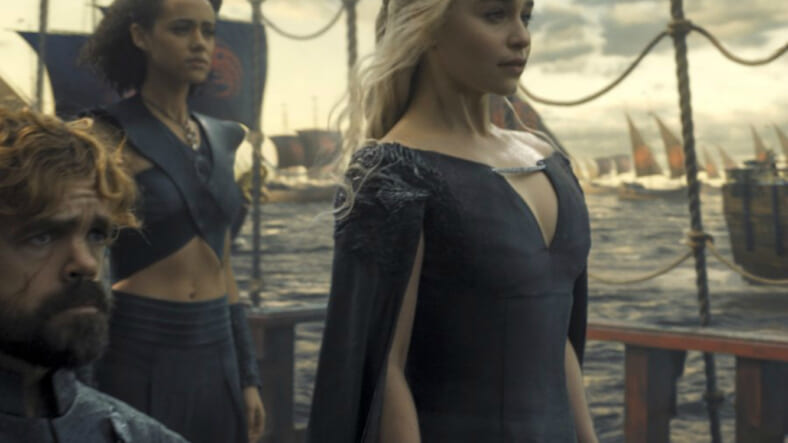 Last night’s episode of the HBO fantasy juggernaut Game of Thrones concluded its sixth season, and it was freaking epic. It was probably even more action-packed than the previous episode, Battle of the Bastards, which really says something, considering that one was called the best episode ever.

In Sunday night’s finale, a lot of people died, there were some gut-wrenching twists, and we got some much needed closure on some pressing plot matters. Ready for a GIF-tastic recap of what went down?

If you haven’t watched The Winds of Winter, stop reading now and go watch it, because spoilers.

In the season finale, we bade farewell to a boatload of characters, mainly thanks to Cersei Lannister blowing up King’s Landing with a massive wildfire.

Even though we knew there was a good chance this was going to happen (hello, foreshadowing), the crazy wildfire kills basically half the cast, including the High Sparrow (Jonathan Pryce), Margaery Tyrell (Natalie Dormer), Loras Tyrell (Finn Jones), Mace Tyrell (Roger Ashton-Griffiths) and Kevan Lannister (Ian Gelder). Pretty much everyone who wasn’t on Cersei’s side. A moment of silence, please.

Before the green-hued explosion, Cersei and Tommen don’t show up for the trial and Margaery realizes some serious shit is about to go down.

“The trial can wait. We all need to leave,” she tries reasoning with the High Sparrow, but of course, he doesn’t listen. Then the wildfire sweeps through, killing them all.

Though he was saved from the wildfire by his mom, Cersei, who confined him inside his quarters, King Tommen responds to the news by jumping out a window and killing himself.

When Grand Maester Pycelle goes looking for the king, he’s hacked to death by a bunch of knife-wielding kids, and Lancel Lannister faces the same fate somewhere else in the bowels of the castle.

…and tortures the Septa Unella, a.k.a. the Shame Nun. “I killed your High Sparrow and all his little sparrows, all his septons, septas, all his filthy soldiers because it felt good to watch them burn. It felt good to imagine their shock and their pain.”

We finally find out Jon Snow’s birthright – he’s not Ned Stark’s bastard, he’s the child of Lyanna Stark and Prince Rhaegar Targaryen. It’s confirmed, R+L=J. Oh, and he’s also voted in as the new King of the North.

Now, back to Cersei and her crazy green wildfire.

With everyone out of her way, she’s officially the new Queen of the Seven Kingdoms—just call her the “Mad Queen” at this point. The episode closes with her brother/lover Jamie Lannister arriving at King’s Landing, only to find it ablaze, with a smug-as-shit Cersei sitting on the iron throne.

BUT – little does she know that Daenerys, her beloved dragons, Tyrion, Grey Worm, Missandei Varys, and the Greyjoys are on ships crossing the sea, on their way to take her down. Oh shit! There’s about to be an epic Queen vs. Queen smackdown.

Until next season, Game of Thrones fans.